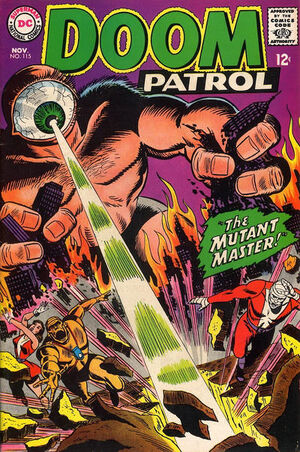 Appearing in "The Mutant Master"Edit

Synopsis for "The Mutant Master"Edit

Three monstrous atomic mutants plan to destroy the world in vengeance for their tragic fate, and the Doom Patrol is defeated in its encounters with the trio. At the same time, Madame Rouge's split personality, aggravated by the mental coercion of both the Brain and the Chief, causes her to become two separate beings, who battle to the destruction of her evil half.

The young Beast Boy smashes a plot by Nazi war criminals to raise an army of intelligent, obedient apes. He is then finally found by his guardian, Nicholas Galtry, who returns with him to America.

Retrieved from "https://heykidscomics.fandom.com/wiki/Doom_Patrol_Vol_1_115?oldid=1424219"
Community content is available under CC-BY-SA unless otherwise noted.