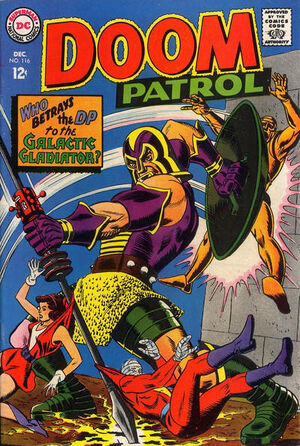 Appearing in "Two to Get Ready... and Three to Die!"Edit

Synopsis for "Two to Get Ready... and Three to Die!"Edit

The reformed Madame Rouge joins the Doom Patrol's struggle against the mutant trio, as do Mento and Beast Boy. Splitting up, it is Robotman and Elasti-Girl who confront the mutants, only to be threatened by an even greater alien menace, the "Galactic Gladiator." The Gladiator's explanation of life on his homeworld, where mutants are the masters and normal humans are slaves, sickens the Earth mutants and they act to stop their own plan to destroy Earth by causing it to collide with a comet, perishing in the effort. Then the supposed alien is revealed as the Chief in a robotic disguise.

Retrieved from "https://heykidscomics.fandom.com/wiki/Doom_Patrol_Vol_1_116?oldid=1424220"
Community content is available under CC-BY-SA unless otherwise noted.