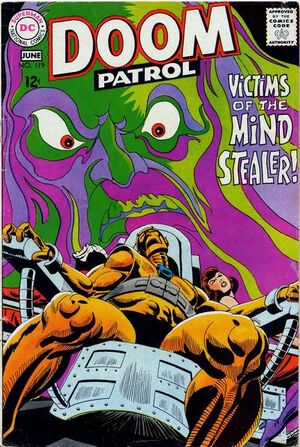 Appearing in "In the Shadow of the Great Guru"Edit

Synopsis for "In the Shadow of the Great Guru"Edit

The Yaramishi Rama Yogi, a mystic guru, transforms Robotman into an ardent pacifist who refuses to use violence for any reason. When the Doom Patrol investigates, the guru captures Negative Man and Elasti-Girl and inflicts them with unreasoning fear and hatred, respectively, which he can trigger in them at a given posthypnotic signal. The team members almost destroy each other before overcoming the Guru's power over them and battling him and his followers to a standstill. The villain's true plot, however, succeeds. While the Doom Patrol is occupied with his machinations, he is able to undo the Chief's rehabilitation of Madame Rouge, who disappears and becomes a villainess in her own right, swearing to destroy the Chief.

Retrieved from "https://heykidscomics.fandom.com/wiki/Doom_Patrol_Vol_1_119?oldid=1424223"
Community content is available under CC-BY-SA unless otherwise noted.