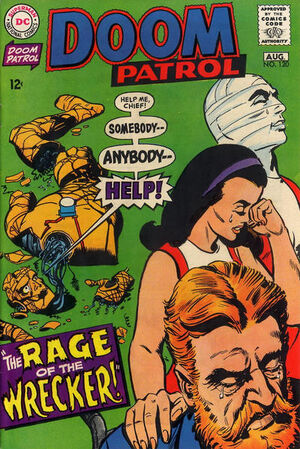 Appearing in "The Rage of the Wrecker"Edit

Synopsis for "The Rage of the Wrecker"Edit

When satellites begin disappearing from Earth's orbit, the Doom Patrol investigates and battles the Wrecker, who is out to destroy all modern technology by means of ray bombardments from a space base. When Robotman's mechanical body is destroyed as well, the Chief transplants his brain into a series of specialized robot bodies, enabling him to accompany Negative Man into space to defeat the villain. Meanwhile, out for a night on the town, Mento, Elasti-Girl, Gar Logan, and Gar's girlfriend Jillian Jackson become involved in a brawl at a discotheque, with humorous results.

Retrieved from "https://heykidscomics.fandom.com/wiki/Doom_Patrol_Vol_1_120?oldid=1424224"
Community content is available under CC-BY-SA unless otherwise noted.