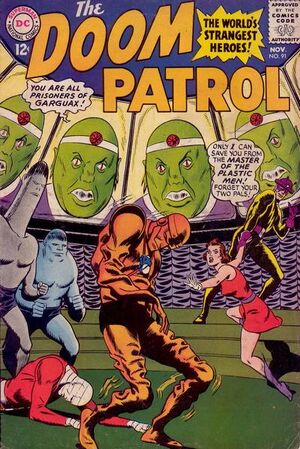 The Doom Patrol are called to a prison where a nitro-bomb has been placed to destroy the institution unless the prisoners demands are met. When the Doom Patrol tries to stop the bomb, they are stopped by a man named Mento, who uses his mental power enhancing helmet to dispose of the bomb instead after he expresses his intention to court Rita and get her to leave the Doom Patrol and team up with him. Deciding to at least see what he has to offer, Rita is taken to his home where Mento reveals himself to be Steven Dayton, the world's fifth richest man, who has devoted his money and time to become a costumed super-hero. When he offers her to join him, Rita declines his offer, telling him her place is with her "family" in the Doom Patrol.

Shortly after, giant plastic creatures appear on Earth and begin attacking parts of the Earth and creating strange structures. While the Doom Patrol is busy fighting off these creatures, Mento realizes that these attacks are also a means of leaving a message: the alien controller of these plastic creatures is providing a countdown to his eventual invasion of the Earth. Boarding the alien's ship, Mento meets Garguax, an alien exiled from his home planet due to his desires for universal conquest and has picked Earth as the starting point of his invasion of planets on the universe. Garguax offers to make Mento his partner, to which the hero declines. Not willing to take no for an answer, Garguax uses his advanced technology to brainwash Mento into doing his bidding.

The Doom Patrol and Mento manage to escape just before the ship explodes, seemingly killing Garguax. Afterwards, Mento once more offers Rita a chance to leave the Doom Patrol and be with him, which she declines once more, however this doesn't dissuade Mento from trying again in the future.

Retrieved from "https://heykidscomics.fandom.com/wiki/Doom_Patrol_Vol_1_91?oldid=1424195"
Community content is available under CC-BY-SA unless otherwise noted.