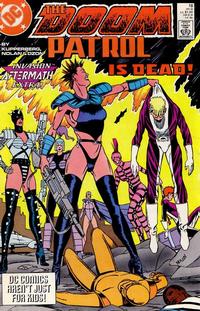 We'll stop you, you know... or somebody else will. Your kind always meets with defeat.

The Doom Patrol returns from their mission in the Arctic Circle during Invasion! to find a world celebrating the defeat of the Alien Alliance. However, with Celsius dead, none of them feel happy with their victory. They lament her unstable mental condition at the time, and that they were unable to save her from a pointless unnecessary death. Although the crowds are cheering for the usually feared and distrusted group, Robotman reminds the groups that this isn't the first time they've saved the world, and crowds are fickle. Garguax announces that their reluctant alliance against the invaders is now over, and he's going to resume trying to destroy them... and taking over the world.

Lodestone and Scott Fischer have a heart-to-heart talk discussing the nature of their own mortality, after the death of their teammate. Scott reveals that his recent power fluctuations have been caused by a resurgence in his long-term battle with cancer, and he is slowly dying. They both cry together, and although she believes that he must go to a hospital... Scott insists that he will not die slowly in a bed without his dignity. If he's going to die sometime, it's going to be acting as a hero and out doing some good. Tempest makes arrangements for the funeral they will be holding, and he grows enraged when the caretaker focuses more on the media coverage than honoring the death of a hero with dignity.

Garguax and his mercenaries the Sirens launch a direct attack on the Doom Patrol Headquarters. They have developed specific weaponry to combat each of their enemies' powers, ray guns that will neutralize each individual threat. Larry Trainor is heavily injured in a helicopter crash. Negative Woman is completely depowered when the Sirens blast her negative self and sever its connection with her physical body.

The Chief calls in a favor from the President himself. In the name of national defense, he is allowed access to one of the laser satellites built in the Strategic Defense Initiative program. He locks on target, and blows up Garguax's ship with a laser strike, completely obliterating him and killing him in the process too. With their master killed in action, the Sirens decide that their battle is no longer worth fighting, and depart on their own. Although no one was killed, the Headquarters has been set on fire and is now destroyed. Trainor is hospitalized, Negative Woman has to leave the team, and the Patrol has to concentrate simply on where they're going to sleep that night.

Two days later, they all attend Arani's funeral. Robotman gives her eulogy, and the Chief remarks on the tragedy of her deluded condition at the time of her demise. After paying their respects, it is time to go home once more... they take solace in that at least the day can't get any worse. And then the skies go black, and the Gene Bomb sent by the Dominators final contingent strikes. It is a last ditch effort to destroy every single metahuman on the planet on a genetic level through biochemical warfare.

Retrieved from "https://heykidscomics.fandom.com/wiki/Doom_Patrol_Vol_2_18?oldid=1547903"
Community content is available under CC-BY-SA unless otherwise noted.