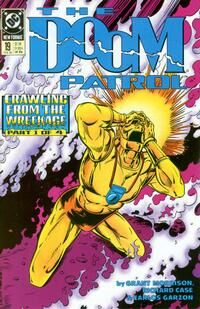 Appearing in "Crawling from the Wreckage"Edit

Synopsis for "Crawling from the Wreckage"Edit

After the recent alien invasion that nearly destroyed their team, the surviving members of the Doom Patrol are struggling to deal with the deaths of their friends and their own misgivings about ever returning to superheroics.

Robotman has since checked himself into a psychiatric ward, plagued by nightmares of the accident that saddled him with his robotic body. He has become depressed and bitter with the knowledge that he will never be human again.

Niles Caulder and Joshua Clay, meanwhile, have been placing calls to check in on the others. They learn that Larry Trainor is in stable condition at Alamance General Hospital after crashing his helicopter, while Rhea Jones was left comatose in the wake of the Gene Bomb. While Joshua intended only to learn whether his friends are okay, the Chief hoped that he might be able to reform the Doom Patrol soon. Though the Chief extends him an invitation, Joshua politely refuses to join. Even so, Clay is to play an important part in Caulder's future plans.

Doctor Will Magnus visits Cliff in the hopes of bringing him some cheer, but Robotman is too depressed. As his human brain is housed within an entirely robotic body, he has all of the same impulses, but he can't feel anything. He has all of the memories of what physical sensations used to feel like, but they haunt him, and he is constantly aware of the phantom body which isn't there. He breaks down, and demonstrates his emptiness by slamming his metal head into a wall over and over, and the lack of physical feeling fills him with emotional pain. Magnus suggests that the Doom Patrol might have helped him deal with these feelings, but Cliff doesn't want to go back to the team that got Rita, Arani and Scott killed.

Larry is visited by Doctor Eleanor Poole, who assures him that he will be healed and ready to leave within days. After she leaves the room, though, a dark shadow appears in his window and calls to him. The Negative Spirit speaks to him for the first time, and it intends to make some changes for Larry. It causes Larry to call for Dr. Poole, who, upon entering the room, becomes entangled in an alchemical marriage which fuses the three entities into a single being.

In order to give Cliff some perspective, Magnus introduces him to someone who has far worse problems than he does. Another patient who refers to herself as Crazy Jane suffers from dissociative disorder as a result of abuse she received as a child. She has since developed dozens of alternate personalities. However, in combination with the detonation of the gene bomb, each of her personalities has its own superpower. After speaking with her, Cliff realizes that she is in greater need of help than he is, and decides to make himself responsible for her.

Elsewhere, something sinister underlies the events of a car crash. A policeman witnessed the driver, consumed in flames, walk away from the explosion to warn the Scissormen. Before dying, he left behind a strange black book. Even the government operatives sent to investigate are perturbed by these events. Even so, all they can do is call their superiors, who will contact the pentagon, who will contact the President - and then he'll contact Niles Caulder.

Retrieved from "https://heykidscomics.fandom.com/wiki/Doom_Patrol_Vol_2_19?oldid=1507292"
Community content is available under CC-BY-SA unless otherwise noted.