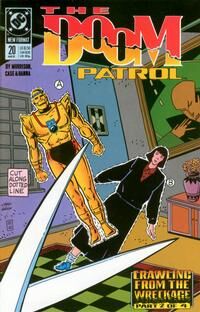 My race is mixed, my sex is mixed, I am woman and man and light with darkness, mixed. Mixed. I am nothing special, nothing pure. I am mud and flame.

Appearing in "Crawling from the Wreckage, Part 2: Cautionary Tales"Edit

Synopsis for "Crawling from the Wreckage, Part 2: Cautionary Tales"Edit

Father McGarry has stopped believing in miracles, but still, every Saturday, he walks through the debris left behind by the Gene Bomb in search of some sign of God. Today, he spots a sign meant to say "Have Faith in God", but the G is obscured such that it reads "Have Faith in Cod". At that moment, it begins raining fish - a wide variety of fish, too - but no cod. Saddened by the irony, Father McGarry is suddenly crushed by a giant refrigerator, fallen from the sky.

Elsewhere, Niles Caulder and Joshua Clay visit the Alamance Memorial Hospital after hearing that Larry Trainor turned into some kind of creature overnight. The doctors believe that what they discovered is some kind of amalgamation of both Larry and his doctor Eleanor Poole. It also emits some kind of radiation which required them to wrap it in bandages. The Chief asks Larry if he remembers him, but the voice that comes from the bandages is not Larry's. It announces that it is a mix in both race and sex, a series of contradictory mergers. Rather than answer to Larry or Eleanor, the wrapped figure with both male and female characteristics suggests that they call it Rebis.

Somewhere in the village of Greenock, Scotland, a young boy named Stuart is displeased with the idea of going to church on Sunday. As he thinks on this, trying to savour his Saturday, he hears a sound from his wardrobe. When he opens it, he is filled with horror. His comes some time later to ask him what he wants for dinner, and is surprised to find that his son has been rendered a boy-shaped void.

After their visit, the Chief explains that the name Rebis was a term used by the medieval alchemists to identify the result of a chymical wedding. Leaving his companions for a moment, Caulder returns to Rebis' room and asks whether it might like to join his Doom Patrol.

Meanwhile, Cliff Steele is still voluntarily committed to a mental institution in order to deal with the trauma of losing his body. He receives a visit from Will Magnus, who remarks that he seems to be making progress. In addition, his attention to the young lady known as Crazy Jane has apparently seen her improving as well. Cliff's help in helping her organize herself and cataloguing her new super-powers has been invaluable. Before taking his leave, Magnus intimates that he took Cliff's complaints about his robot body to heart, and decided to make him a new body using the advances in cybernetic technology that have become available.

Afterwards, Cliff receives a visit from Crazy Jane, who introduces herself as Driver 8, the driver of Jane's train of thought and monitor of the stations of the underground. The underground is how Jane refers to the place where all of her personalities reside. Cliff delivers a message from other personalities that they like her, and she responds that many of her personalities like him too. As they walk, a crash overhead alerts them to Ralph, a fellow patient, throwing himself from an upper window to the ground below. In his injured delirium, Ralph repeats the name "Scissormen" over and over.

While taking the subway through Manhattan, a man who has just taken something that was not his to take finds his familiar route changed suddenly when the train stops at Orqwith station. Out the train's windows, he can see that everything, even the platform, is made of bones. He prays that the doors don't open, but they do anyway. Onto the train steps the Scissorman with his blood-red scissors.

Late at night, while up writing, Cliff is distracted by the sound of Jane chanting the phrase "Blood of the Lamb" over and over. He finds her covered in blood, and when he tries to calm her, she warns that the Scissormen are coming. In fact, they have already arrived. Four men armed with giant scissors for hands begin advancing on them, and Cliff desperately drags Jane away from them. The room they rush into is occupied by a doctor who is floating in mid-air. He claims that he is existing in two places at once, and he can feel the Scissormen cutting off his thumbs. Before long, the Scissormen smash through the wall, and it is only by the grace of Jane's sudden ability to teleport them away that they are saved.

Out in the courtyard, though, the pair are beset by a crowd of white, people-shaped spaces, apparently cut straight out of reality.

Around the world, a number of strange occurrences are all connected to the arrival of the Scissorman.

Retrieved from "https://heykidscomics.fandom.com/wiki/Doom_Patrol_Vol_2_20?oldid=1424250"
Community content is available under CC-BY-SA unless otherwise noted.