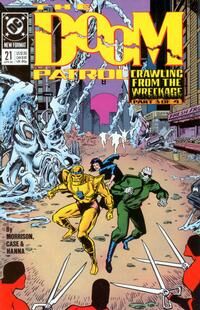 Reality and unreality have no clear distinction in our present circumstances.

Appearing in "Worlds in Collision"Edit

Synopsis for "Worlds in Collision"Edit

In their attempt to escape from the Scissormen, Cliff Steele and Crazy Jane run to Kansas City, where the old Doom Patrol Headquarters was hidden in Union Station. Unfortunately, Cliff failed to realize that the end of the Doom Patrol would mean the end of the headquarters - but at least a note was left behind to say that the HQ had been moved to Rhode Island. However, as they discover the note, the Scissormen catch up to them, and the pair of them are forced to run for it.

Cliff leads Jane to one of the Doom Patrol's planes, which is still in working condition, hoping they can fly to safety in it. He notices, however, that one of her personalities has actually transformed her, physically, and the accompanying power makes her a horrifying site. With long, sharp fingernails, she tears at a Scissorman until nothing remains of him but shreds. Fortunately, Black Annis leaves Jane's mind in time for Cliff to drag her aboard the plane and fly away, leaving the remaining Scissormen behind.

The plane takes them directly to the Rhode Island headquarters, which the Chief explains was the former home of the original Justice League. He is aware of the Scissormen, having received the black book from the intelligence services recently. In fact, Jane has already finished deciphering the book with the help of her personalities. Apparently, the book is a metafiction that tells the story of the creation of the book by a group of philosophers who were seeking to radically alter human thought.

The book would be filled with parasitic ideas that would enter human consciousness and transform it. This, the Chief explains, is a form of memetic memory. These philosophers decided to create a world-city called Orqwith that would exist on a plane of reality that intersects with this one, and the history and geography of that world-city is recorded in the black book. In the end, though, the philosophers were devoured by their own creations. The Scissormen are apparently a kind of religious sect that worships a god who exists at the intersection of realities, and they are Orqwith's own version of the Inquisition.

To further their investigation, the Chief has actually managed to capture one of these Scissormen already, thanks to Rebis' radiation. This is all rather bothersome to Cliff, who can't be sure whether any of the things he has just heard or seen are actually real. The Chief points out that there is no clear distinction between reality and unreality - both appear to be present. Either way, he hopes to find out just how extensive the intrusion of Orqwith has been on their own reality, and then to track down the philosophers who wrote the book.

Cliff and Joshua Clay are saddled with watching the Scissorman, and end up talking about how weird things have become for them. Joshua hadn't even intended to be there still, but he has since found that he wouldn't have anywhere to go if he did leave. In an attempt to console him, Cliff responds that at least Joshua is real - unlike the Scissorman, who has apparently managed to disappear in the brief moment their backs were turned.

Looking up, they see that there are several more Scissormen advancing on them, and Joshua is forced to use his powers against them. They marvel at the fact that when they hit the Scissormen, they simply fade away. With that in mind, they manage to deal with the threat - until one Scissorman appears behind Josh and cuts him out of reality. The rest of the team rushes in too late, and though Cliff is concerned for Josh's life, Rebis claims that he and all of those the Scissormen took are out there somewhere, waiting for them.

Rashly, Cliff runs out to meet them, and with Jane and Rebis behind him, they all disappear from reality, and enter Orqwith.

Retrieved from "https://heykidscomics.fandom.com/wiki/Doom_Patrol_Vol_2_21?oldid=1424251"
Community content is available under CC-BY-SA unless otherwise noted.