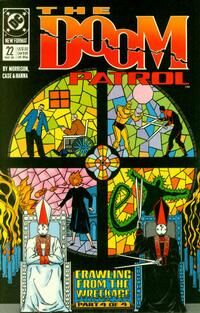 I think it's clear from what's happened over the past few days that the world needs the Doom Patrol... needs us more than ever. Don't you see? There are areas in which only we are qualified to operate. When the rational world breaks down, we can cope... because we've been there, in ourselves. We have known madness... and delirium... and we are no longer afraid. The world has turned its back on us, but it's time to stop being victims, time to show them we're more than just freaks or cripples. Believe me, they need us. And we need each other. Don't let the Doom Patrol die again.

Appearing in "Crawling From The Wreckage, Part 4: The Ossuary"Edit

Synopsis for "Crawling From The Wreckage, Part 4: The Ossuary"Edit

Orqwith is a world of a city. At its centre stands Quadrivium, and in that, the Ossuary; the great Cathedral of Orqwith. The cathedral is occupied by two priests. One is a liar and the other is honest, but both are waiting to answer the question that will unmake the world.

Now that Cliff Steele is there in Orqwith, he can think of absolutely nothing funny to say. All around them, they can see the structures made of bone, and the populace - the hollow children - who were once denizens of the real world, and now reside in Orqwith. With horror, Cliff spots Josh Clay, and tries to talk to him, but a Scissorman comes running. The Negative Spirit within Rebis destroys the attacker, but Cliff's companions urge him to leave Josh be for now, with Crazy Jane teleporting them away.

Elsewhere, The Chief tracks down a man named Reinmann, who is somehow connected to the Black Book of Orqwith. Reinmann reaches for a pistol, claiming that he doesn't fear a cripple. In response, Caulder fires a bullet into Reinmann's thigh, explaining that now they are both cripples, and should talk.

The Negative Spirit flies over a pair of Scissormen, who somehow manage to blast it into pieces. With desperation, Rebis runs over to absorb the many pieces. The negative spirit managed to gather some crucial information from the scissormen before it was destroyed, and Jane's personality Mama Pentecost helps translate the words for them. Though the words come out as nonsense, she claims that they have learned how to get the better of their enemies.

Reinmann explains that the book was meant to be an intellectual joke, but it soon began to infringe on reality. When the Scissormen came for one of them, they tried to destroy the book to no avail. However, they did write a logical inconsistency in the fiction. They incorporated the philosophical question of why there is something rather than nothing. Orqwith can be destroyed if it is made to confront its own unreality.

Jane has just determined that exact fact. Orqwith is not supposed to be real. All they have to do is ask the two priests of the Ossuary why there is something rather than nothing, and Orqwith will be gone. Unfortunately, the Ossuary is guarded by nearly one hundred Scissormen.

Rebis claims that the Negative Spirit can get them into the Ossuary, though only five minutes of energy remain for its powers. Cliff and Jane rush Rebis into action as the Scissormen notice them there. As Rebis flies over the cathedral and smashes through the stained-glass ceiling, Cliff and Jane are tasked with preventing the numerous Scissormen from getting inside.

The Chief reports that the anomalous activity caused by Orqwith's intrusion appeares to have ceased, but all the same, these events have convinced him more than ever that the world needs a Doom Patrol. With only a little reluctance, the four heroes agree to join Caulder in his team.

Elsehwere, a mysterious figure looks in on Rhea Jones in her hospital bed, while she lays comatose.

In Paraguay, a Doctor Bruckner warns of the escape of someone called Herr Niemand.

Retrieved from "https://heykidscomics.fandom.com/wiki/Doom_Patrol_Vol_2_22?oldid=1424252"
Community content is available under CC-BY-SA unless otherwise noted.