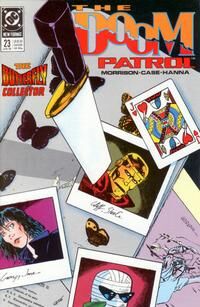 Did you think you could ever escape? Do you dream of an end to pain? There is no way out. There is no end. Especially not today.

Appearing in "The Butterfly Collector"Edit

Synopsis for "The Butterfly Collector"Edit

Overnight, the temperature outside the Secret Sanctuary of the Doom Patrol dropped dramatically. The unexpected weather change has made The Chief curious, and he plots out the system of equations that represent that weather pattern into a Lorenz Attractor - a graphical representation that resembles a butterfly. He is joined that morning by Josh Clay, who has decided that he will stay with the Doom Patrol after all - but only in a strictly medical capacity. Dismissively, the Chief agrees to the terms, and introduces Josh to another new member: Dorothy Spinner.

Elsewhere, Rebis visits with Eleanor Poole's husband Dan, who is more than a little bothered by the idea that his wife has merged with a man, and become this bandaged hermaphrodite. Rather than listen to Dan's pleas for his wife, Rebis becomes fascinated by a wall of Matryoshka dolls, hoping to take one away with it.

Meanwhile, Cliff Steele and Crazy Jane go the the hospital to visit their comatose friend Rhea Jones. Unfortunately, they discover that her room has been ransacked, and she is nowhere to be found.

While wandering the halls of the new Doom Patrol Headquarters, Dorothy and Josh discuss how the Gene-bomb affected her. Josh stops her, suddenly, hearing an unusual sound. Turning, he sees a horrifying giant bug, and tries to shove Dorothy out of its path. Instead, she rushes forward, and sternly orders the creature to go away. Soon, the creature seems to fade away, and Dorothy explains that the Gene-bomb gave her the ability to conjure what she imagines into reality - though it isn't exactly within her control.

In England, Holly McKenzie wakes on the banks of the Thames river after spending the night in a squat in Brixton. She's not sure how she got from there to here, but the smoking wreckage of a police car and the bodies within seem to tell part of the story. Her attention is caught by a strange voice calling her name. A silhouette stands on the edge of the water, and approaches her. He introduces himself to her as Mister Nobody.

In Rhea's room, Jane senses something sinister, and is suddenly taken over by a personality who demands to be shown to a book store. Cliff is forced to chase after her as she determinedly leaves the hospital, and smashes through the front window of the nearest bookstore before stealing several books off of the shelves. Embarrassed, Cliff leaves an address to send the bill to.

Returning to the hospital, Jane begins cutting the pages of the books into little pieces, and arranging them on the floor, claiming that this technique can be used as a form of divination. Later, with Rebis in attendance, Jane begins to read the words that she has collected in sequence. In reading them, Cliff notices that there are a number of references in the texts to Jack the Ripper. Jane explains that the names of the victims are the key to opening the door to finding Rhea. She begins reciting the names; Mary Ann Nichols through Rhea Jones, and finally says the name Red Jack. With that, the door opens to a hallway that was not there before. After the Doom Patrollers pass through it, the nursing staff peers through, but all they see is one of the hospital's corridors, as usual.

Cliff finds himself separated from his companions, hoping that whatever reality he is in, it isn't the work of the Scissormen again. He is startled by the sight of strange man, who warns him that it is too late, as he holds Rhea's prone body in one hand, and a knife in the other.

Retrieved from "https://heykidscomics.fandom.com/wiki/Doom_Patrol_Vol_2_23?oldid=1424253"
Community content is available under CC-BY-SA unless otherwise noted.