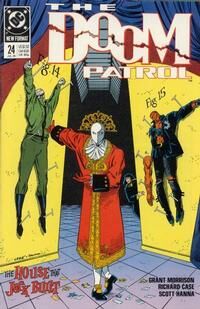 I should really introduce myself. Red Jack's the name. You may, however, be more familiar with my other title... God. Pleased to meet you. It's an old, old story. The original story in fact. I created the universe, and they told me I had to be punished. Punished! And all because I had stained the beauty of perfect nothingness with gross matter.

Appearing in "The House That Jack Built"Edit

Synopsis for "The House That Jack Built"Edit

Rebis finds itself in darkness, and fumbles around for a light switch. The chandelier illuminates an ornately decorated room with ultraviolet strobes. Exploring the hallways of strange mansion, Rebis is attacked by a giant marionette.

Elsewhere in the house, Crazy Jane calls out to the companions she was separated from, and comes upon an old Mutoscope labelled What the Butler Saw. When she looks into it, she sees a strange scene of a shirtless man preparing to eat dinner while a woman holds a baby nearby. He reveals his dinner to be a plate full of human hands armed with knives and forks. His blodd spatters on the wall, and the woman cries while her baby is revealed to be some kind of large insect. Jane recoils with some discomfort, only to see that someone is watching her through a set of eye-holes in the ceiling.

Cliff Steele, meanwhile, has come face to face with the owner of this house. He introduces a still comatose Rhea Jones as his wife, which enrages Cliff. He rushes forward, but the earth splits in two, opening a fissure beneath his feet, apparently at his host's will. Grabbing onto the edge, Cliff barely manages to hold on while Red Jack introduces himself, claiming that he is God.

In another section of the house, Crazy Jane continues her search. She discovers a hallway where the walls are covered in live butterflies, pinned there in an entomological fashion. Seeing them pinned there, she feels sympathy for their plight.

Red Jack claims that he was punished for creating reality - by himself - and stuck in this endless prison. Despite Cliff's numerous attempts to attack him, he fails every time, and Jack unexpectedly plunges a knife viciously into Rhea's shoulder. Red Jack promises that nothing ever really dies in his house, it is merely pain that sustains his existence. In fact, he began his butterfly collection because the butterflies' pain nourished him. Unfortunately, their nervous systems are so rudimentary as to require that he capture millions of them.

He goes on to explain how every hundred years, he finds his way into Cliff's reality. One hundred years ago, he had the joy of murdering several prostitutes in Whitechapel as Jack the Ripper. Now, he has decided to take a human wife, having noticed Rhea's abilities, despite the coma. Rebis, meanwhile, has since freed himself of the marionette, and upon discovering Red Jack, attacks. Nonchalantly, Jack skewers Rebis, and tears off Cliff's arm, reminding them that he is not to be crossed.

Unexpectedly, though, Red Jack senses Rebis' nervous system shutting down, which is a result of the Negative Spirit leaving its body. The spirit attacks, but even its efforts are to no avail. As Cliff hobbles toward him again, Red Jack drops a chandelier on his head. He is surprised, though, when Rhea herself attacks him with his own knife. Stumbling from the sensation of a knife in his back, Jack is confused by a feeling of emptiness inside him. He is swarmed by millions of butterflies, apparently freed from their walls.

As they fly away, their pain leaves him, and he has no sustenance. His life force begins to fade. Crazy Jane appears, and it turns out that it was she who released the butterflies from their prison. Standing over Jack's corpse, Cliff wonders if he really was God. Rebis gathers Rhea up in its arms, and they hope to find a way back home.

Somewhere in Detroit, a a crazed homeless man named Lloyd Jefferspm has just burnt down a building. He is accosted by Mister Nobody, who invites him to a Brotherhood.

Retrieved from "https://heykidscomics.fandom.com/wiki/Doom_Patrol_Vol_2_24?oldid=1424254"
Community content is available under CC-BY-SA unless otherwise noted.