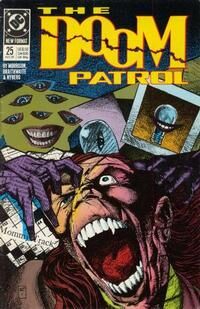 I killed them, Mr. Clay. I killed my imaginary friends and they're real mad about it. It's not psychic power. They're real and they've come back to punish me.

At the Doom Patrol's Secret Sanctuary, The Chief asks Josh Clay to take a look around the Souvenir Room for something called a Materioptikon at the request of Maxwell Lord, who claims that the item was left behind there from the days when the Justice League resided there. The item once belonged to Doctor Destiny, who used it to externalize his subconscious. Josh agrees to the task, despite his worries that the remainder of the Doom Patrol has been missing for nearly two days. The Chief, meanwhile, is abandoning him to complete some work in Washington, D.C.

Joshua is reading when Dorothy Spinner interrupts him, claiming that something has gone wrong with her television. Pleased to see her, Josh agrees to at least try to help. As it turns out, the problem with the TV is stranger than he expected: every channel shows an image of a room empty of everything but a table. As a result, Dorothy has been quite bored - especially given that she has used television to entertain herself for a long time, given that she couldn't go out much with her unusual appearance. Josh wonders if her parents must have taught her, instead of sending her to school. Dorothy responds that her parents were too busy - her imaginary friends taught her everything.

Josh is confused, though he admits that he once had an imaginary dog called Mr. Vinegar. Dorothy explains that she had a whole family of imaginary friends who used to play with her and tell her stories. Unfortunately, those stories became more grim, and they were giving her nightmares, so Dorothy shot them with an imaginary gun when she was eleven. Suddenly remembering the task he was assigned by the Chief, Joshua tactfully excuses himself to check out the souvenir room.

In the souvenir room, Josh finds a device labelled "Materioptikon", but his attention is caught by some strange ink-like stains on the floor. Suspicious, he wanders out the door, but hears little voices repeating the phrase "inky boys".

In her room, Dorothy discovers that the image on the TV has changed, such that a pair of bloody shoes is resting on the table. The image fills her with a sense of unwanted recognition, and she turns around to see a horrible six-eyed creature.

Joshua frantically hits the elevator call-button as he is assaulted by the inky boys, risen up from the stains on the floor. As they shove him backwards into the elevator, he finds himself in a swamp somewhere that resembles Easter Island. He is disturbed to see a monstrous Scissorman coming for him, and he cries out. Just as suddenly as found himself in that place, he reappears in the Doom Patrol Headquarters, and realizes that Dorothy might be in danger as well.

Back in Dorothy's room, it appears that her imaginary family has returned, and they are not happy about her decision to kill them off. Their revenge involves forcing her to wear the bloody shoes, while Damn All uses his giant needle to sew the door shut. Fortunately, Joshua still has his powers, and he blasts the door open, and he and Dorothy make an escape.

Locking themselves in the meeting room, Josh demands an explanation, hoping that Dorothy can simply make their tormentors go away like she did the giant bug they met with earlier. Unfortunately, she doesn't believe it could have been a result of her power, because she was never that strong. She believes that they're real, come back from death to punish her. Soon, she becomes hysterical, terrified that they will make her wear the red shoes. Desperately, Josh begs her to tell him about the red shoes. She responds that she had wanted ruby slippers like those Dorothy Gale wore in the Wizard of Oz. But her imaginary friends insisted that she couldn't have ruby slippers, only red shoes, like in the Hans Christian Andersen tale. In that story, the shoes had caused the wearer to dance so much that she had to have her feet cut off to stop - and then the shoes kept dancing with the severed feet inside them.

Josh realizes that what Dorothy has done is turned the red shoes into a symbol charged with emotion; a symbol representing growing up. In order to make the assault stop, she has to face her feelings and choose to grow up. He promises her that all of the pain and fear she feels is in her mind, and that some thing has just externalized those feelings into her imaginary friends revived. It's almost as though something has boosted her image-making power. At this, he realizes that what has been boosting that power is the Materioptikon. Without hesitation, Josh rushes down to the souvenir room and smashes the machine.

Meanwhile, Dorothy returns to her room to face her imaginary family and demands to be given the red shoes. Josh returns to find her alone in the room, wearing the shoes. She explains that despite what she feared, they were really ruby slippers all along.

In Paris, Mister Nobody recruits Byron Shelley into his Brotherhood of Evil.

Retrieved from "https://heykidscomics.fandom.com/wiki/Doom_Patrol_Vol_2_25?oldid=1424255"
Community content is available under CC-BY-SA unless otherwise noted.