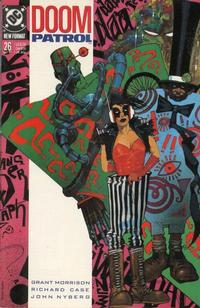 Japan idolizes its greatest superhero Sunburst so much that a crew of cameras follows his every move as part of the hit show "The New Adventures of Sunburst". On this occasion, Sunburst is checking in on a woman he recently encountered whose super-power appears to be that she has every super-power that her enemy fails to think of. She is also afflicted with a preoccupying phobia of dirt. His visit is interrupted by the appearance of the new super-villains Sleepwalk and The Fog who easily knock him aside and grab the woman up, recruiting her to their cause.

Meanwhile, the missing members of the Doom Patrol have returned with Rhea Jones, who remains comatose. The Chieg, however, believes that there is something unusual about her coma. He believes that Rhea has entered a kind of chrysalis state, which will eventually result in some kind of physical metamorphosis for her.

At Mister Nobody's Paris flat, Sleepwalk and The Fog return with their new recruit. In response to her fears about dirt, Nobody offers her a special filtered suit and mask to wear, which she accepts gratefully. He then has them all sit down and listen to his story.

Back at Doom Patrol Headquarters, Cliff Steele is struggling to take down his promised compendium of all of Crazy Jane's personalities and their powers. With a list of nearly 50 names, Cliff is eager for a break. Jane - as Driver 8 - explains that some of her personalities refuse to come out, and reside in the deepest stations of the Underground. The concept of the underground is confusing to Cliff, and he wonders if it might be a good idea to try to map it out. At this idea, one of Jane's personalities becomes violent, warning him against going any further. She smashes her coffee mug on a table and attempts to cut her wrist with a shard, crying out that a painting is waiting to get her - that something very bad is going to happen to Jane.

Mister Nobody explains how he had been named Eric Morden, and had been hiding in Paraguay as an unsung member of the Brotherhood of Evil; hiding from his former compatriots Monsieur Mallah and The Brain who had sworn to kill him if they ever saw him again. So, he spent years in Paraguay, hosted by a Doctor Bruckner. The doctor convinced Eric to undergo experiments derived from the Nazis' eugenics programs to become a "new man". Bruckner placed him in a spherical white room and paralyzed him from the neck down. Then, he merely left Eric there, experiencing virtually nothing. By the end of the first day, he had become completely insane. Time lost all meaning for him, though he would later learn that he was only trapped there for three days. On the night of that third day, he noticed a spot in the whiteness. He became obsessed with it, imagining it as some massive horror that appeared as a speck because it was far away from him. He imagined what might happen if it took notice of him, and came closer, increasing in size. The mental break that resulted caused the room to explode, and in that moment, Eric Morden was replaced with Mister Nobody - the spirit of the twenty-first century.

Naturally, he killed everyone there, and in the wake of the Gene-bomb, he began collecting a new generation of super-powered outcasts - those assembled before him. Rather than create a new Brotherhood of Evil - he feels that "good" and "evil" are outmoded concepts - he has a better name. They will let unreason reign and become the Brotherhood of Dada.

Retrieved from "https://heykidscomics.fandom.com/wiki/Doom_Patrol_Vol_2_26?oldid=1424256"
Community content is available under CC-BY-SA unless otherwise noted.