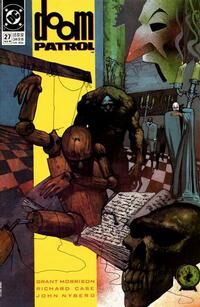 There! We have now taken over the world. What are you going to do about that?

Appearing in "The Painting That Ate Paris"Edit

Synopsis for "The Painting That Ate Paris"Edit

In Paris, Mister Nobody reads from the writings of Thomas De Quincey regarding a conversation the philosopher had with poet Samuel Taylor Coleridge on the subject of a painting he claimed could devour a person. Nobody declares that he wants that painting - the painting that eats people. Though the original was destroyed in 1814, a duplicate was created many years later. The painting eventually resurfaced in 1923 as part of the collection of the enigmatic and sadistic Comte D'Aguille. It was then seized by the Nazis, and fell into the hands of Horst Eismann, a collector of occult oddities, who has since kept it in a converted observatory in the French alps. Mister Nobody intends his Brotherhood of Dada to break in and steal that painting.

At the Doom Patrol Headquarters, Cliff Steele checks in on Rebis, who was once his friend Larry, out of concern. Since the Negative Spirit merged Larry with his doctor Eleanor Poole, Rebis has been in constant conversation with itself. Its room is empty, and it has a preoccupation with a set of Matryoshka dolls. Cliff is further concerned by the smell coming from under the bandages Rebis has wrapped itself in. Rebis explains that though its male and female body is perfect in every aspect, its mind remains fragmented - three minds in one body is problematic, after all. Claiming to be able to see through time as clearly as if through a window, Rebis recites the lyrics to Hugh Mearns' "The Man Who Wasn't There", it remarks that they must beware of men who aren't there.

At his retreat, Horst Eismann welcomes fellow connoisseurs of the strange Mr. Ballard and Doctor Silence. He leads them down into his sub-basement, wherein he keeps many of his curiosities. Though some of his more interesting items must remain in the vaults, he keeps a great many items in this sub-basement gallery. He has invited them there because they have expressed an interest in making some trades with him.

Elsewhere in the compound, one of Eismann's guards politely greets another, but receives no response as the other shuffles through a nearby doorway. Moments later, he sees that same man coming down the hallway and greeting him. With some discomfort, they realize that security has been breached - but not in time to prevent The Quiz from disabling the alarms. With force, the Brotherhood of Dada makes its way into the sub-basement and demands the painting of Eismann. Nervously, he explains that the painting is in the vault. As they steal the painting, Eismann warns that the painting is highly dangerous - which is fine with them, as they are all insane.

In Paris, Mister Nobody proudly announces the arrival of the Brotherhood of Dada, and welcomes the assembled to their celebration. For their entertainment, he presents an absurdist ritual, hanging the painting on an easel beneath the entrance to the Eiffel Tower. The police soon decide that it is time to put a stop to the demonstration. Depiste their efforts, The Quiz's powers render their methods ineffective.

Back at the Doom Patrol Headquarers, The Chief orders Cliff to assemble the others for immediate travel to Paris, where something weird is happening.

By reciting an automatic poem, Mister Nobody activates the painting, which devours Paris and the Brotherhood of Dada with it.

Retrieved from "https://heykidscomics.fandom.com/wiki/Doom_Patrol_Vol_2_27?oldid=1424257"
Community content is available under CC-BY-SA unless otherwise noted.