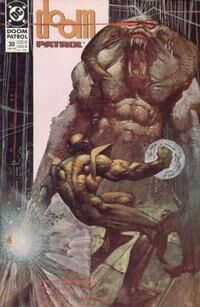 Little man. You're all the same. We should never have trusted you. All men are the same. I'll open you up like an old tin can.

Since her encounter wit the Fifth Horseman, Crazy Jane has been in a cataleptic state. In a last-ditch effort, Cliff Steele decides to take drastic measures to get inside her mind, with Rebis' help. The theory is that Cliff is the only one close enough to Jane to be allowed past the defensive barriers she has created in her mind. By disconnecting his brain from his robot body, they can connect it to Jane's own brain psychically, and give him access to her mind.

Cliff finds himself floating above a map, whose streets are all named for the numerous personalities residing in Jane's head. As he falls into the map, he finds himself in a subway system; what Jane calls the "Underground". He is greeted at the station by Driver 8, who explains that a significant amount of damage has been done to the Underground, which the Engineer and Pointman are working on repairing. Stations have been damaged at almost every level, thanks to the Fifth Horseman. As such, nobody has been willing to take control of Jane's body, because they're afraid that they will do more damage by doing so.

As they ride the rails deeper, Cliff confides that he has been experiencing strange flashes of images, which Driver 8 explains are psychic fallout from K-5. The tremors of the initial trauma that caused her psychotic break still resonate. K-5 is Kay Challis, Jane's real name. However, Kay has barely existed since she was 5 years old, remaining dormant since the abuse she suffered. The Jane personality, meanwhile, has been badly hurt, and Driver 8 worries that she will leave all of the other personalities to die, going to "the well", a place in the lowest level of the Underground, which is said to lead to a buried and forgotten section of the rail line. If Jane goes into the well, the Undergound will surely be destroyed. Hoping she has not done so, they check at Jane's own personal station, but are disappointed to find that she is not there. Resignedly, they go deeper.

Driver 8 explains that each of Jane's personalities was developed to help her deal with a certain aspect of life that she couldn't handle herself. Some exist only to bear pain, and spend their entire existence screaming in agony. Two years ago, the dominant personality was named Miranda, and she was a graphic designer in Metropolis. One day, though, in a church at Easter, a memory stirred in Miranda's mind of Kay's abuse, and it broke her. She destroyed herself by entering the well. The Underground was nearly destroyed, and the Kay's body checked herself into the hospital where she and Cliff first met. As they pass through Miranda's old station, Driver 8 warns Cliff to cover his eyes, and not bear witness to the horrors that exist in its place.

After getting through, they are forced to continue on foot, due to debris. Before entering the maintenance tunnels, Cliff's attention is caught by the sound of a voice. Driver 8 explains that this station belongs to Sylvia, a poetic personality who was created to handle their host's feelings of claustrophobia and despair during her teens. Her poems are all incomplete, though, but she hopes that she can one day assemble all of the fragments into a single poem that will be the key to escaping her room.

Deeper still, they encounter Black Annis, the violent and monstrous personality, who refuses to let them pass. Angrily, Annis complains that all men are the same, and that Jane should never have put her trust in Cliff. Using her knife-like claws, she slices through his mechanical innards. He and Driver 8 try to explain that they're not coming to hurt Kay, but Black Annis has gathered all of Jane's personalities together to stop them from proceeding, some of whom believe that they all deserve to die; that Jane should enter the well. Cliff explains that he's not a man anymore. Though many do not trust him, the imposing Lady Purple appears and insists that he be let through - alone.

Deeper and deeper, passing several personalities who experience nothing but pain, Cliff finds Jane standing on the edge of the well, ready to fall. She is overcome by Kay Challis' memory of working on a jigsaw puzzle when her father came for her and sexually abused her. Before she can fall in, Cliff grabs her while she screams that no matter what she does, she will never be strong enough to fight her father. At that moment, the massive and monstrous memory of Kay's father begins crawling out of the well, and plucks Cliff up in its claws. Cliff cries out that it should take him instead; that it should spare Jane.

Seeing Cliff's life in peril, Jane's care for him allows her to muster the inner strength to face her father. Angrily, she shouts out that she hates him and that she is no longer afraid of him. In her great rage, the monster disintigrates into many tiny jigsaw pieces.

With that, Jane wakes on the hospital bed with Josh Clay beside her. Though Jane is back, Rebis has lost contact with Cliff's mind.

Retrieved from "https://heykidscomics.fandom.com/wiki/Doom_Patrol_Vol_2_30?oldid=1424260"
Community content is available under CC-BY-SA unless otherwise noted.