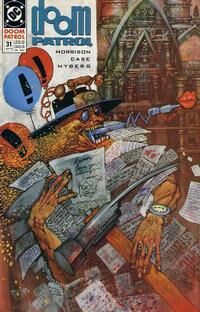 Me? I'm very big in the world of international strangeness, as a matter of fact. The name's Willoughby Kipling... And if you haven't heard of me, then you're obviously not reading the right magazines.

Appearing in "The Word Made Flesh"Edit

Synopsis for "The Word Made Flesh"Edit

Willoughby Kipling has suspected the presence of the Cult of the Unwritten Book in his area for some time, and when everyone in the city forgot their telephone numbers for a full fifteen minutes, he knew it was a sign that they were there. So, he filled his hotel room with clocks, waiting for the moment when they would stop, and he would know the cult was at it again. Just as he began his preparations for their inevitable encounter (which consisted primarily of getting very drunk), the clocks stopped. The cult had found him.

He recognized his guests as an assassination squad called Fear the Sky, and if he failed to answer their question, they would remove his testicles with some hooks, fashioned in the shape of question marks. He had an answer, though. He got out his copy of A Child's Garden of Verses and read from one of its poems. Hearing it, the assassins became trapped within one of the book's illustrations by Charles Robinson. All that remained to answer for Kipling was where was the Book of the Fifth Window, and where was the boy?

Meanwhile, Cliff Steele woke to see the face of his creator Will Magnus accompanied by The Chief and Josh Clay. They had built him a new body, which was very different from the one he had grown used to. So different, in fact, that he had regained the ability to taste, smell, and feel. Magnus explained that Cliff could actually enhance his senses beyond those of human capability at will, thanks to his handiwork. Turning around, Cliff saw his old body, and thought on it forlornly - it appeared to him like an empty house.

Grateful to Cliff for saving her life, Crazy Jane rushed in and embraced him, making several rather saccharine statements with regard to her intent to hug and kiss him. Suddenly, she balked, and with embarrassment, claimed that it was the personality Baby Doll who had taken control of her just then. Awkwardly, Cliff suggested that it was time for him to put some pants on.

A Templar, Willoughby Kipling called on the oracular head Baphomet for advice, using a paper-cut ritual to summon it. With the head of a horse, Baphomet gave ill tidings: the Cult intended to summon the Antigod. It was more important than ever that he find the boy and the cult's base. After using an unorthodox method of travel, Willoughby appeared outside the bedroom of Dorothy Spinner, and demanded that she take him to her leader.

Without introducing himself, Willoughby explained that the Cult collected dead skin cells and reformed them into creatures called the Dry Bachelors. Likewise, they used the skin of murder victims to create Mystery Kites, which imprison the victims within the geometry of the frames. These served to clear a path for the Never-Never Boys; Wynken, Blynken, and Nod. They were currently in pursuit of the Fifth Window, and if they and the Cult of the Unwritten Book got their hands on him, they'd summon the Unmaker and end the universe.

Meanwhile, the Cult had mobilized in Barcelona, which was set to suffer an outbreak of curious phenomena. The Fifth Window had run, but he was forced to use special techniques to drop his heart-rate in order to prevent the Mystery Kites from hearing it. The Cult's anger at failing to find the boy resulted in several unusual happenings.

Finally, he ran straight into the Doom Patrol, whom Willoughby Kipling had managed to convince to help him.

Retrieved from "https://heykidscomics.fandom.com/wiki/Doom_Patrol_Vol_2_31?oldid=1424261"
Community content is available under CC-BY-SA unless otherwise noted.