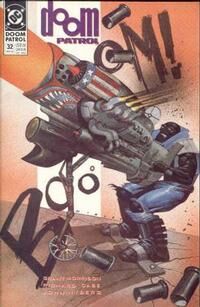 Please... I'm not really involved with these people. They've led me astray. I... I have asthma. I'm on medication. My dear mother is in an iron lung. I'm her only link to society... Have pity. Look behind you.

At the request of Willoughby Kipling, the Doom Patrol seeks out a young man in Barcelona, who has become the target of the dangerous Cult of the Unwritten Book. He is reluctant to escape with them, as he has no guarantee that they are not with the cult themselves. They have little time to prove themselves, as the Hiroshima Shadows soon catch up to them and attack. Kipling takes the boy aside, leaving the Doom Patrol to face the threat on their own. Fortunately, Cliff Steele's new body's weaponry is effective against the shadows, and Rebis and Crazy Jane are able to pitch in.

Returning to the young man's hotel with him, Kipling explains how eighteen years ago, a child was born with his skin almost completely covered with tattooed words. That child is this boy, and these tattooed words comprise the text of the Book of the Fifth Window. The Cult has waited nearly 2000 years for the book to appear, so that they can learn the secret name of the Antigod from it, and bring about the end of the universe. The Antigod first appeared at the moment that God said "Let there be light," and the first shadow was cast - that shadow was God's own shadow; the unmaker, the decreator.

Jane notices something unusual coming, and Willoughby shouts for her to get out of sight. A strange creature - the shroud on stilts - wanders past the window, apparently seeking them. Kipling explains that such apparitions will keep seeking them until they locate and seal "the wound". To that end, he has been soaking a phone book in 7 up which was blessed by a defrocked priest. The holy pop erases all the names in the directory except that of the person bearing the wound. Flipping through the damp book, he finds the name Emilio Cuervo.

At that same time, Emilio Cuervo is found by the Cult's Pale Police, and runs for his life.

Kipling suggests that Cuervo might be found in the Cathedral Sagrada Familia. He bears the wound, which is the gateway directly into the headquarters of the Cult of the Unwritten Book, usually manifesting as a gash on the human body. It gets bigger and bigger until there is nothing left but the wound, and cult agents travel through it into this world. The Cult's HQ is located in the ghost of a German town called Nürnheim, which was destroyed long ago. Now that town resides in any number of places, including photographs, drawings, and comics. Up to speed, the boy and Jane stay behind while the others seek out Cuervo.

While they are out, Jane and the boy are attacked by The Little Sisters of Our Lady of the Razor in the hotel room. In response, Jane allows Black Annis to take over her body, and rips them to shreds. Unfortunately, Cult agents manage to grab the boy while she is occupied with them.

Elsewhere, Willoughby and Rebis are detained by a member of the Pale Police, leaving Cliff to find Emilio Cuervo in the cathedral. Unfortunately, he can't prevent the wound from growing, and he accidentally falls into it. Cliff finds his surroundings on the other side strangely familiar. Nürnheim has been hiding within a snow globe possessed by Josh Clay.

Meanwhile, finding that Jane has failed to protect the Fifth Window, Kipling is outraged. The Cult will surely have read him by now. Soon, he is proved right, as the Decreator has arrived.

Retrieved from "https://heykidscomics.fandom.com/wiki/Doom_Patrol_Vol_2_32?oldid=1424262"
Community content is available under CC-BY-SA unless otherwise noted.