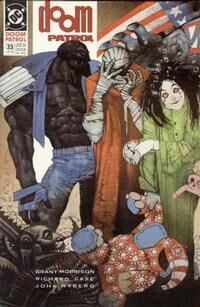 Cigarettes and asteroids, grains of sand, red settees and overcoats and neutron stars... all disappearing, one by one. And there isn't a single bloody thing we can do to stop it.

Appearing in "The Puppet Theater"Edit

Synopsis for "The Puppet Theater"Edit

Cliff Steele, meanwhile, has entered the wound and discovered the hidden city of Nürnheim, where the Cult's headquarters is located. The first creatures he encounters are the hoodmen, who subsist by eating the words that are on the tips of others' tongues. They also convert words to electricity. Having heard an entire phrase, Cliff shorts out, and they drag his body away to Doctor Mirabilis' Most Excellent and Unusual Puppet Theater.

Meanwhile, The Chief has discovered readings that indicate that the end of the world is nigh - though he considers the end of the world to be all in a day's work for his Doom Patrol. However, if they don't hear back from the others soon, he, Dorothy and Josh may have to enter the field as a last resort.

Kipling is convinced that nothing can be done to stop the Decreator, but he leads Rebis and Crazy Jane to the Sagrada Familia, where Emilio Cuervo has become the wound - the entrance to this world from Nürnheim. At the moment of their arrival, they face a gang of cultists trying to enter into this world. Cowardly, Willoughby allows Jane and Rebis to handle them.

In the Puppet Theater, Cliff hears the Book of the Fifth Window calling out to him. They are both dragged away to meet the Archons of Nürnheim - two giant puppets. Confused, Cliff demands to know what aim they might have in destroying everything. The puppets reply that their goal is eternal nothingness.

As the world disappears around them, only Crazy Jane has any idea of what they can do. She claims that the Decreator is simply a word; a vibration. She proposes that they transmit a counter-vibration that would cancel it out using the cathedral itself, which was built to gather and broadcast spiritual energies. In practice, the vibration they produce has some kind of effect.

When the puppets order Cliff and the Fifth Window's deaths, Cliff makes a break for it, and rushes up to the belfry of the church in which the puppet theater is housed, leaping onto one of the ropes attached to the bells' pulley system, and causing them to peel out loudly. The sound alerts Josh Clay, in whose snow globe Nürnheim has been hiding. Sure that the source of the danger is inside it, he smashes it on a table, causing Cliff and the Fifth Window to appear in the Doom Patrol Headquarters. Desperately, Cliff warns Josh to finish destroying the snow globe, but the town inside it begins growing and growing until that effort would be useless. That is, until the city simply disappears before their eyes.

Reuniting with the rest of the team, Willoughby, Jane, and Rebis explain that the city of Nürnheim itself was decreated at the last second by the Antigod that the city's residents summoned. Unfortunately, Jane's plan didn't actually stop the Decreator, it merely slowed it down to such a slow speed that mysterious disappearances will still occur, but be negligible. That said, Willoughby makes his exit.

Meanwhile, the Chief decides he must work on improving Cliff's new body, given that it malfunctioned. Unnoticed by the others, Rhea Jones' vitals start spiking.

Retrieved from "https://heykidscomics.fandom.com/wiki/Doom_Patrol_Vol_2_33?oldid=1424263"
Community content is available under CC-BY-SA unless otherwise noted.