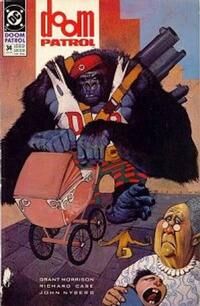 I refuse to perform a delicate operation without chocolate.

Appearing in "The Soul of a New Machine"Edit

Synopsis for "The Soul of a New Machine"Edit

Annoyed that Cliff Steele's robotic body malfunctioned, The Chief sets about trying to repair and improve it, cursing Dr. Magnus' shoddy workmanship. In the meantime, he has Josh Clay post someone to take on watch duty alongside Rhea Jones in the event that she becomes unstable.

The others are, for the most part, occupied. Crazy Jane and Dorothy Spinner are on an errand for the Chief, Cliff is on the operating table, and Rebis could be anywhere. Grumpily, The Chief proclaims that he will never work with Dr. Magnus again, as he puts the finishing touches on Cliff's body, for the time being, declaring that the body should now, at least, be serviceable. In the meantime, he and Joshua decide to head into town in search of chocolate, leaving Cliff's brain sitting disembodied in a jar, while his body remains immobile on the table.

Cliff, meanwhile, reflects on what it's like to be a disembodied brain. The experience of sensory deprivation is like one of going through several sets of doors. The first door is the door of boredom, where the lack of sensory input causes boredom, irritation, and panic. Following that, the door of hallucination brings nightmares and grotesque delusions. When that passes, a third door opens to something quite indescribable.

Suddenly, Cliff begins hearing a voice, and he senses that he's been plugged into some kind of speaker system. The voice claims that it is that of Cliff's body. The body admits that it has developed consciousness, and it fears what might happen if Cliff's brain is returned to it. It doesn't want to lose its new found independence. In aid of retaining that independence, the body drills a hole through Cliff's tank, draining it slowly of its nutrient fluids. The body muses on the problem of duality, and whether the mind persists after the brain dies - which is certain to happen to Cliff, if his fluid drains out.

Elsewhere, Monsieur Mallah, an intelligent gorilla, pushes a living brain in a carriage, disguised as a baby. As they stroll down the street, they discuss the mind-body relationship, until it occurs to them that they are trying to keep a low profile. Naturally, a talking gorilla with a French accent pushing a brain in a baby carriage doesn't lend itself to that. Unable to see, the Brain demands to know whether Mallah is still wearing his revolutionary beret, given to him by Fidel Castro himself. The gorilla announces that he will not remove it until he is bested in battle, or chess. Longing for the pleasures of the body, the Brain responds that he is eager to play some strip-chess.

The Brain recalls how he had his henchmen capture the gorilla and enhance his mind until Mallah became a genius, thereby proving that René Descartes was wrong when he proposed that animals were non-sentient. Originally, he had intended to implant himself into the gorilla's body, but with a brilliant mind already residing there, he could not bring himself to do it. Instead, they became partners, and the cornerstones of the Brotherhood of Evil. By the time that the Brain has come out of his reverie, the pair of them have arrived at Doom Patrol Headquarters.

Meanwhile, Cliff's former body explains that he has equipped himself to explode if anyone attempts to put another brain inside him, hoping to prevent his consciousness from being supplanted. Hearing that, Cliff responds that if no one would be willing to put a brain into the body, there would be no reason to kill him. The body responds that thinking is outside of his purview. He is merely intended to act.

Soon, Mallah and the Brain burst into the lab, and, thinking that they are there to stop him, Cliff's body attacks them. Knowing that his master craves action as well, Mallah tosses the Brain into Cliff's own brain-vat, causing great confusion for both of the brains, who cannot actually see each other. Still, the Brain announces his intent to fight Cliff in open combat, impressing the ridiculousness of his situation upon Cliff.

Mallah and the body have it out, with Mallah eventually slamming the robotic shell back onto the operating table, and strapping it down. He ignores the body's warnings about weapons systems, and prepares to place the Brain inside the robotic body. After a time, the Brain wakes in his new body, and feels wonderful. Eagerly, Brain decides it's time to do away with Cliff's brain, and take their revenge on the Doom Patrol, but there is something niggling at his mind.

Turning to Mallah, he presses his friend to admit that they share profound feelings for each other. The Brain himself confesses that he loves the super-intelligent gorilla, and begs for a kiss. Mallah removes the gum from his mouth, and locks lips with the Brain's robotic body, just as its weapons systems activate, and explode.

With confusion, Cliff calls out, wondering what happened out there, as Mallah's prized beret lands atop Cliff's vat.

Retrieved from "https://heykidscomics.fandom.com/wiki/Doom_Patrol_Vol_2_34?oldid=1424264"
Community content is available under CC-BY-SA unless otherwise noted.