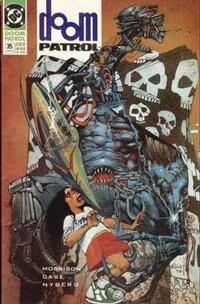 All I'm trying to say is I can't stand this... I want to be part of the world, you know what I'm saying? I want to smell flowers. And splash water on my face and... and be a part of... well, life. I don't know what I mean. Look, let's just forget it. Forget the whole thing. I hate moaning, anyway. Everybody here's got problems of their own. I don't see how we can possibly help each other. Look at us! Have you ever seen so many complete rejects in one room together? What does anyone here know about life?

Appearing in "Down Paradise Way"Edit

Synopsis for "Down Paradise Way"Edit

After some time of waiting, Sara Furness is delighted to see her old friend Danny come back to her - a spectacle of sorts, given that Danny is, in fact, a living street. She rushes out onto his pavement to greet him, demanding to know where he's been. Most recently, he tells her via the letters of a shop-window's sign, he was in Berlin.

Confused, Cliff Steele helps The Chief catologue and organize the contents of the Doom Patrol Headquarters in preparation for their move from it. Cliff is confused because he has only just got used to this place, since the old headquarters was destroyed. He is also grumbling because, since Mallah and The Brain broke into the headquarters and destroyed his body, Cliff has had to use his old body, and it is highly unsatisfying. The Chief assures him that he hasn't forgotten his promise to get a new one arranged soon.

Meanwhile, Josh Clay attempts to help young Dorothy Spinner to control her powers of imagination. At first, no matter how she tries, she cannot make her imaginary friends manifest themselves in reality. Suddenly, though, one of them appears menacingly behind her, and it is only through Josh's guidance in taking the thing apart slowly that she manages to make it disappear. Though she hasn't quite got the hang of it, Dorothy's powers are within her control.

Elsewhere, a man named Darren Jones returns home from work to greet his wife, but he is put off by the silence that ensues. With a start, his wife recalls that she forgot to activate their home's internal laugh-track, and they try the whole thing over again. With that out of the way, Darren asks what's for dinner and reacts with horror when his wife announces that she has made skinless stew. His boss is coming for dinner, and is allergic to skinless stew. Angry that she may have spoiled his chance at a promotion, he jams a barbecuing fork into her eyes. Grumpily, he goes down to his den, where an organization he has created called the Men from N.O.W.H.E.R.E. waits for him.

That evening, Darren calls them all for a meeting over dinner, and asks that they tell him what N.O.W.H.E.R.E. stands for - they all give different answers. Grinning, he calls his wife to bring them some fruit juice, and blinded from the prior attack, she stumbles into the room to the sound of the laugh track. Worried that she will make a fool of him in front of his boss, he gives her a set of droopy spring eye-glasses to wear. In the meantime, he declares that his organization was formed in order to enforce normalcy; to eradicate eccentricities, anomalies, and peculiarities. One such peculiarity that Darren is already aware of is Danny the Street.

Cliff, meanwhile, is becoming increasingly bored with the body he has been confined to, and is also feeling alienated from his companions by his inability to smell or feel.

Darren explains how Danny the Street travels and hides within other cities, and while his shops are all macho, they are dressed in fairy lights and lace curtains. As such, Darren declares that Danny is a further eccentricity to stomp out, given that he is a transvestite. This cannot be tolerated. The Men from N.O.W.H.E.R.E. must destroy Danny the Street.

While Sara attends Danny's perpetual cabaret, the show is interrupted by reports that an innocent resident of the street has been murdered. Sara rushes outside and finds the Men from N.O.W.H.E.R.E. waiting outside. She dodges their weapon blasts, and warns Danny to make a run for it.

Retrieved from "https://heykidscomics.fandom.com/wiki/Doom_Patrol_Vol_2_35?oldid=1424265"
Community content is available under CC-BY-SA unless otherwise noted.