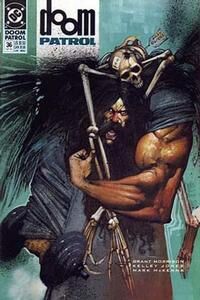 You want to try and kill me, huh? Go on! Kill me, asshole! I've never been dead before!

Appearing in "Box of Delights"Edit

Synopsis for "Box of Delights"Edit

Having been alerted to a disturbance, the Doom Patrol is surprised to see a street that isn't listed on the map sitting right in the middle of New York. There appears to be an altercation going on further down it, and Cliff attempts to ascertain whose side they ought to join. When he is shot by one of the Men from N.O.W.H.E.R.E. because of his unusual appearance, he has found his answer.

As they fight the Men from N.O.W.H.E.R.E., Cliff is accosted by Sara Furness, who explains that these attackers have come to destroy her friend Danny the Street. Rebis confirms that this street is sentient. It can think and move, and now it has been targeted for death.

Meanwhile, a ship full of strange aliens is en route to earth, with intention of selling a type of clock which collects rather than measures time.

While battling the Men from N.O.W.H.E.R.E., Crazy Jane is interrupted by a resident of Danny the Street who seems to know about these invaders. Though he warns her against it, Jane looks into a tear in one of the attackers' sleeves, and is lost in another dimension called the tea-room of despair. However, Jane's apparent enjoyment of the tea-room's atmosphere causes the Man from N.O.W.H.E.R.E.'s head to explode, and with that, the Doom Patrol believes they have won. That is, until one of them returns, and shoots Sara in the back. Danny cries out in anguish, and disappears.

Meanwhile, Darren Jones begins building a new Delirium Box, hoping to find success in his quest to eliminate all quirks from the world. His wife nervously suggests that perhaps they might be quirky themselves, which Darren denies categorically. As he steps outside, he is horrified to see that their house has ended up on Danny the Street.

When he sees the Doom Patrol out there, he uses his delirium box on them, to send them into delirium, but Danny opens a hole in the ground, and he tumbles down into the basement of the cabaret. There, he is dressed and made up as a transvestite, and then returned home just in time to embarrass himself in front of his boss.

On the street, the man who tried to help Jane steps forward and introduces himself as Flex Mentallo, the once legendary man of muscle mystery. The Men from N.O.W.H.E.R.E. had made him forget who he was.

Back at Doom Patrol headquarters, Dorothy Spinner is surprised when Rhea Jones begins to wake from her coma. She rushes out to warn the Chief and Josh Clay, as music seems to emanate from Rhea's body. By the time they get back to her room, it is clear that Rhea has changed.

Retrieved from "https://heykidscomics.fandom.com/wiki/Doom_Patrol_Vol_2_36?oldid=1424266"
Community content is available under CC-BY-SA unless otherwise noted.