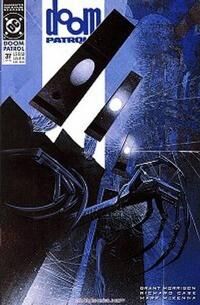 Empty. The Circus is empty. Carousels turn, generators rumble. But there's nothign here. Can't you feel it? Nothing. Nothing living.

The Chief leads Cliff to the room of Rhea Jones, who has only just awakened from her coma - but changed. Rhea is emitting a kind of electromagnetic energy, and though she feels fine, it is clear to Cliff that his theory that her coma was in fact some kind of chrysalis state was correct. Their questions are frustrating for her, because rhea feels as though there are things which require her attention elsewhere. She explains that the earth has nerves, like the human body does. She is now wired into those nerves.

Meanwhile, Dorothy Spinner attempts to serve coffee and tea to the former residents of Danny the Street. Sara Furness, Danny's friend, demands to be allowed to leave and see him. The Chief has ordered that these people be made to wait, though. Flex Mentallo approaches Dorotyh as well, demanding to see the Chief too. Annoyed that these people are harassing her friend, Crazy Jane turns on them all, and tells them to shut up.

Meanwhile, in space, the approaching aliens worry that if they do not succeed in their mission on earth, they will certainly face a fate that is so awful that "panic" is a mild word for what they might feel in that case.

Rhea ignores the Chief's questions, and decides to check out the circus. Rebis explains that there is a circus nearby, appearing as a result of forces which are being gathered by manipulations of time and space. Cliff decides it would be a good idea to investigate.

At the circus, Rhea is recognized as the former "Rheena, the Amazon Girl" by the ringmaster, and is welcomed into the Magical Maze of Mirrors.

Cliff, Rebis, and Jane enter the circus and soon sense that the place is empty - of patrons and of life in general. Jane wanders away from her companions to the big-top, where hundreds of cardboard standees of audience members have been set up to watch the ringmaster introduce Romulus and Remus - a pair of Siamese twins. She returns to her friends, and assures them that something is not right. They agree to split up, and search for Rhea independently.

Soon, Rebis is beckoned away by the ringmaster, and led to the Grotto of the Grotesque, where a number of unusual beings are put on display, including an albino sleepwalker who speaks to angels and a glass woman. Though he finds it all fascinating, he senses that there is someone watching him, somewhere.

In the mirror maze, Rhea sees her past self reflected in the glass, and they beckon to her. Confused and upset, Rhea drops a jar of honey that she was given by the ringmaster, and it smashes on the ground.

Jane, meanwhile, finds herself in the fortuneteller's tent. The old crone uses a living Tarot - live people arranged into tableaus recreating the images of the Tarot's Major Arcana. With this, she predicts that Jane will face a trap, ruin, and a sacrifice.

Cliff is urged by the ringmaster to try out the shooting gallery, but he walks on to a booth showing a clockwork man. The ringmaster ignores his questions, and simply explains the display, to Cliff's annoyance. Finally, he becomes so annoyed, that he grabs the man by his collar, and demands to know where Rhea Jones is.

As the Doom Patrol begins to suspect that they are simply being stalled, the people watching them decide to make a tactical retreat, and the circus begins to fold in on itself. Before leaving, they decide to take Rebis with them. Soon, the circus is gone, and Cliff and Jane can see that both Rhea and Rebis have been taken from them.

They are interrupted by the arrival of the aliens, who realize that they have come too late. The Geomancers have anticipated them.

Retrieved from "https://heykidscomics.fandom.com/wiki/Doom_Patrol_Vol_2_37?oldid=1424267"
Community content is available under CC-BY-SA unless otherwise noted.