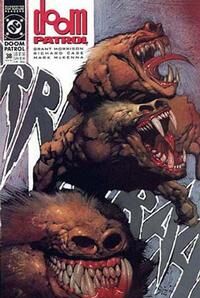 Well, it won't be the first time we jumped head first into something stupid.

Appearing in "Lost in Space"Edit

Synopsis for "Lost in Space"Edit

In 1945, a squadron of bomber planes disappeared, leaving only a strange message communicated over their radios. In 1956, a psychic sleuth was called to investigate a haunted dinner party. He left a tape recorder in the haunted room and when playing it back later, heard the same message left by the bomber squadron in 1945. In 1968, a college student bought the sugar tongs from that same haunted dinner party at a garage sale, and that night, he and the sugar tongs disappeared, leaving only a cryptic message for his mother, echoing that same message. In each case, there was mention of something called the Dead Hand.

Rebis, having been kidnapped by the Geomancers finds itself in a strange and senseless landscape. A figure appears and explains that Rhea Jones, who was also kidnapped, is safe. They are in what is called the Kaleidoscape. Rebis comes to understand that the Geomancers are aliens, and having had their homes taken from them, the Geomancers now collect things and bring them to the Kaleidoscape, which is a realm without space, movement, or perspective. Whoever had attacked the Geomancers initially had broken down their defences by visiting upon them a plague of silence. Without words, their space had been weakened because there had been nothing to define that space. Without space, they had nothing to occupy. As a result, though, they became beings purely of mind, unfettered by space. The enemy is called the Mesh, and it will ever be their tormentor.

Meanwhile, at the Doom Patrol headquarters, the other aliens explain that they were sent by the Orthodoxy to locate and neutralize what they call the pupa, but they were preempted by the Geomancers, and the pupa was stolen away to the Kaleidoscape. They fear that the pupa will be used against them ti attack a stone they prize called the Judge Rock. When asked where Rhea and Rebis are, the aliens simply repeat that the pupa has been taken by the Geomancers.

Adopting a different approach, the Chief asks what the Orthodoxy is. The aliens respond that they belong to the Orthodoxy of the Insect Mesh, which is the one true church of the cage. Their enemies are the geomancers, whose refusal to accept the sanctity of the pheromone communion preceded their attempt to leave the orthodoxy. The apostate Huss led a faction away from the Mesh, instigating a bitter conflict which continues even now. Their war had started off conventionally, but soon spread into telekinesis and psychic attacks, launching crippling emotional attacks on each other. The orthodoxy then devised the plagues, which led to the inadvertent creation of the Kaleidoscape.

It is expected that the Geomancers have kidnapped the pupa, which is clearly their word for Rhea, because of her electromagnetic bonding cycle. Out of time, the Orthodoxy's emissaries urge the Doom Patrol to stop asking questions, and to accompany them back to the Mesh if they wish. Without much thought, Crazy Jane and Cliff agree to follow them into space.

Rebis is lead to a more stable part of the Kaleidoscape, which the Geomancer explains is kept intact by the willpower of Huss and his shadow cabinet. Rebis is then introduced to Huss himself, who is busy entertaining Rhea. Rebis makes sure that she is alright, before turning to Huss for answers. Huss explains that Rhea's potential drew them to her. They managed to remove her before she managed to bond fully with her home world, in accordance with their plan, she will be of help to them in their war - and Rebis will be too. With luck, neither will be harmed - unless they refuse to help.

Huss explains that he wants more than to perpetuate this conflict. He desires to be remembered and admired as the one who made a difference. He hopes to find the flower from the tree of knowledge which is secreted away on the mythical Judge Rock. Huss hopes that Rhea will help them destroy the Judge Rock in order to get their hands on that flower. Rhea is not put off by the plan.

Meanwhile, Jane and Cliff arrive on the strange planet where the Insect Mesh resides.

Retrieved from "https://heykidscomics.fandom.com/wiki/Doom_Patrol_Vol_2_38?oldid=1424268"
Community content is available under CC-BY-SA unless otherwise noted.