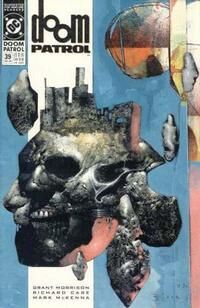 Aren't you impressed? Don't you ever get excited Cliff?

Appearing in "Bell, Book, and Candle"Edit

Synopsis for "Bell, Book, and Candle"Edit

Dolores Watson makes her way to the home of Madame La Sirène, a psychic, who explains that the first words spoken by Alexander Graham Bell over his telephone were a summoning to his assistant Thomas A. Watson. Inadvertently, he had made the telephone a device of magic, which would allow ghosts to communicate over it. Dolores had been told to see the psychic because she is trying to get in touch with someone very important to her - someone dead. She is seeking Flex Mentallo. The psychic has a message for her, though it is not from Flex: "And all the fishes were hollow, my dear, and all of them swam at me." Further, the psychic asks whether Dolores has heard of something called the Dead Hand. She warns that the dead have been frightened by this message.

Crazy Jane is naturally excited to see the world of the Insect Mesh, where she and Cliff Steele have been taken. Cliff, though, is unmoved while the Orthodoxy emissaries prepare themselves for war. They are taken to the Cage; the heart of the Mesh, where all of the Orthodoxy was created. They are expected already by the waiting Anathematicians of the Cage.

Back on Earth, Dorothy Spinner gives a wary Flex Mentallo a haircut and shave, with positive results.

At the Cage, the remaining emissary subjects itself to the punishment of the Anathematicians for having failed to secure the pupa - their name for Rhea Jones. Before such punishment can be meted out, a Smoke Dog appears. Cliff reacts with confusion when the dog attacks him, and in anger, Jane becomes Black Annis, and tears the dog to pieces. Unfortunately, she is too late to prevent the dog from ripping Cliff in half.

Meanwhile, in the Kaleidoscape, Huss explains that he sent the Smoke Dog as retaliation, but it is only a token gesture, as it would be too weak to do any significant harm. He leads Rebis and Rhea to the Shadow Cabinet, a device which powers the Kaleidoscape. The cabinet is filled with jars which contain the essences of all of the previous rulers of the Geomancers, all of whom were named Huss.

Jane is forced to watch the Orthodoxy's preparations for the pheromone communion while she is assured that Cliff is being repaired. During the communion, the people of the Mesh are filled with a wash of every emotion at once. Later, Jane's guide shows her to Cliff, whose legs have been replaced with those of a massive spider.

Retrieved from "https://heykidscomics.fandom.com/wiki/Doom_Patrol_Vol_2_39?oldid=1424269"
Community content is available under CC-BY-SA unless otherwise noted.