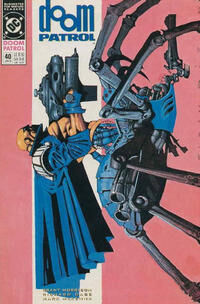 I know wars don't make sense at the best of times, but there's something... I don't know... something disconnected and unreal about this. Am I talking crap?

Appearing in "Battlefield of Dreams"Edit

Synopsis for "Battlefield of Dreams"Edit

A Mr. Christmas is visited by the Men in Green, a government organization who has been monitoring his conspiracy theories and writings for years. In fact, his writings posed such a danger that years previous, they altered his brain so that he would write nothing but gibberish without realizing it. He had been writing about the mystery of the Dead Hand.

The Orthodoxy of the Insect Mesh have created an army for themselves using the thoughtforms of the sleeping citizens. In the meantime, Cliff Steele has been fitted with some robotic spider-legs, as replacements for his old ones, which were torn off by a Smoke Dog sent by the Geomancers.

In the Kaleidoscape, Rebis and Rhea Jones have been tasked by Huss, a Geomancer, with destroying the Judge Rock and thereby ending the conflict between the Geomancers and the Insect Mesh. Both sides converge on the outer-edges of the so-called Battlefield Zones that surround the Judge Rock, though neither is aware of the other side's intent. While wandering the Zone of Dismay, Cliff begins to feel as though something about this war isn't right, beyond the fact that there is a war at all. Jane is suspicious as well, but they are attacked soon by a Smoke Dog. Rebis, meanwhile, begins to realize that Huss only wants the Judge Rock destroyed because he is afraid of dying.

Rhea enteres the Judge Rock with ease, and discovers the flower that she was told was hidden deep within it. However, she tires of waiting for Huss' signal, and simply decides to begin destroying things.

Both sides of the battle are confused and awed when they see that the Judge Rock is tumbling from its place in the sky to the ground.

Retrieved from "https://heykidscomics.fandom.com/wiki/Doom_Patrol_Vol_2_40?oldid=1424270"
Community content is available under CC-BY-SA unless otherwise noted.