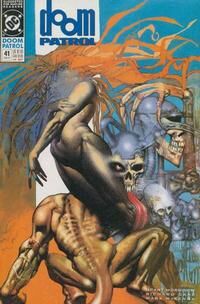 You brought us here to end your war. That's what we're going to do.

Dolores Watson visits one of the five Lost & Found offices in the United States, and meets an eccentric clerk who takes her to the back room, which she is surprised to discover is quite large. He explains that more things get lost than she might think. However, Dolores is not there to find a thing, she is there to find Flex Mentallo, who has been missing since 1958. The man warns that people who seek lost people tend to lose themselves, and then delights as a metal hand reaches out from behind a curtain and murders Dolores Watson.

Meanwhile, the fall of the Judge Rock has wrought havoc on the battlefield where the Geomancers of the Kaleidoscape have been in conflict with the Orthodoxy of the Insect Mesh for generations. The Doom Patrol had the misfortune of becoming involved, and now Cliff Steele struggles to rescue Crazy Jane from the wreckage, despite his having to get used to a set of robotic spider-legs, which have replaced his bottom half.

Once Jane is safe, they spot one of the Orthodoxy bemoaning the lack of meaning in life, with the Judge Rock's collapse. Their Anathematicians arrive on the scene as Huss, leader of the Geomancers declares his victory with Rebis at his side. Cliff is overjoyed to see Rebis there, but they are distracted by the conflict between Huss and the Anathematicians, whom he claims no longer have power over his people, thanks to his bringing down the Judge Rock. Rhea Jones appears, interjecting that it was she who brought down the rock, and she found the flower of life and knowledge that was sought. She tosses it to Cliff, suggesting that he take it back to the Judge Rock, and he will know what to do with it when he gets there. Huss grows angry, but he is pushed back by Rhea's power. Rebis explains that they were brought to end the war, and that is what they will do, whether it is to Huss' benefit or not.

Rebis engages the two factions in a Potlatch. In this ceremony, one side gives a gift to the other, and then the other responds with a gift of greater value. The ceremony typically continues until one side destroys its own village, thereby making the other side's obligation beyond a tolerable level - making the loser whichever side valued possessions and property over honour and ideology.

Huss and the Anathematicians escalate their own potlatch to the point that they each destroy their holy relics and their worlds, until they all have nothing. Finally, Cliff returns, revealing that the only thing he could think to do with the flower of life and knowledge was plant it. Soon, they watch as the Judge Rock glows with a blue light, and rises up into the sky again.

Rhea explains that the Judge Rock is an angel called Balzizras, who had been tasked with the duty of transforming Eden from a physical place to an abstract idea. However, it became dissatisfied with how God had allowed the Earth to turn out, and decided to create its own experiment using a cutting from the tree of knowledge. The result was this planet; a planet built entirely around conflict. The power of real creativity had been frozen with the flower, and now, it has taken root in the Judge Rock.

Rebis confronts Huss and urges him to understand that by destroying his icons, he ended the war. He will be remembered as the one who brought an end to conflict. That should be good enough. One of the Orthodoxy comes up with a plan to build a tower in collaboration between the Mesh and the Kaleidoscape. Everyone agrees that it's a good idea, and the Doom Patrol feel that their work is done.

Rhea, however, has decided on a whim to leave for a particular star that she has taken a fancy to. Despite Cliff's protests, she is gone in moments, leaving him alone with Jane and Rebis, though they came to save her in the first place. Rebis remarks that the idea of eschewing duality for the sake of the tower is symbolic, and it has given it ideas about unity of consciousness. Tiring of all of this, Cliff decides that it's time to go home.

Retrieved from "https://heykidscomics.fandom.com/wiki/Doom_Patrol_Vol_2_41?oldid=1424271"
Community content is available under CC-BY-SA unless otherwise noted.