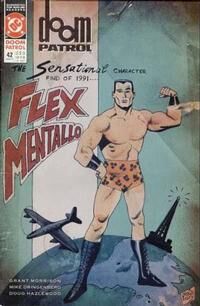 Magic rings found in Christmas cakes, words of power spelled out in bowls of alphabet soup... My origin story's fairly ordinary compared to some.

Having lived on Danny the Street for some time, prior to his discovery, Flex Mentallo, The Chief and Josh Clay return to it, to help Danny's friend Sara search for some things she left behind there. While taking the opportunity to enjoy the services Danny has to offer, the Chief suggests that Flex might take a moment to tell them all a little bit about himself, and the man obliges.

Back in 1954, Flex was a young man named Mac, who was humiliated when he failed to stand up to a bulky man who was being a nuisance on the beach. That night, he wished beyond hoping that he could be a real he-man like the other fellows at the beach, and his wish was answered by a bizarre figure from a nearby men's room who promised to make him a new man. He offered Mac a coupon, instructing him to fill it out, and drop it into the third mailbox he sees on the ninth day of the month.

He took a chance on the man's tip, and soon received a strange book in the mail entitled "Muscle Mystery For You." The book contained techniques that brought him muscle power which developed to such a degree that it could be used to read minds and see into the future or other dimensions. To this day, Flex doesn't know why he was chosen for such power. Soon, he returned to the beach, and got revenge on the man from earlier by socking him in the jaw. It was then that he learned about the power of muscle mystery. By flexing alone, he was able to knock the thug around even more - without touching him. His power wowed the girls on the beach, including his own girlfriend - but he was no longer impressed with her.

In 1956, Mac changed his name to Flex Mentallo, Man of Muscle Mystery, and became a crime fighter. They were good times for him, and on Sundays, he would share that fun with several other adventurers as a team. Most of their adventures had involved the colour green, for some reason. Unfortunately, their team faded away, eventually. Despite life quieting down for him, Flex always had his public to keep him busy - until he met Dolores. He had been judging a swimsuit competition when he met her. She hadn't won, but he had fallen in love with her anyway.

Things changed, though, when he met a man named Norman Grindstone; a reporter. He had been working on the story of the disappearance of Harry Christmas, who was a ghost hunter. He had learned that the disappearance was connected to a series of other disappearances, according to Norman. Flex didn't hear from Norman for three days, when the reporter claimed he had found that the item around which the conspiracy centred was being kept in the Pentagon. After looking over Norman's evidence, and seeing that he was right, Flex never saw the reporter again. Though now, Flex can't remember what he saw, what he did next was spend the next two months trying to flex his muscles so hard that he could cause the Pentagon to become a circle. His determination put a wedge in his relationship with Dolores, and she left him as a result. As much as Flex tried, he could not succeed. He had failed completely, and lost the love of his life.

All he can remember now is that the decision to change the Pentagon's shape had something to do with the Geometry of Anguish. Since he had failed to flex it into a circle, he decided to go to the pentagon directly. Getting in was easy enough, thanks to his muscles' power to cloud men's minds. He found the halls mostly empty, and ventured deeper and deeper. Finally, he saw something earth-shattering - but what it was is lost to him. They took his memories of it. The "they" in question were the Men from N.O.W.H.E.R.E., who had been waiting for him, and none of his power was of any use against them. They had confined him to the Tearoom of Despair, and somehow, he had escaped. Unfortunately, he had escaped without his memories. He wandered homeless for some time.

Finally, he had found Danny the Street, making friends with its residents by challenging them to arm wrestling matches. Years later, when the Doom Patrol arrived, fighting the false Men from N.O.W.H.E.R.E., he remembered who he was and what he had to do. He still has to save everyone from what hides in the Pentagon.

He warns that they must act soon, as they don't have time to wait for the rest of the Doom Patrol to return. When asked whether he has any ideas of how to help, the Chief merely responds that he has decided to move the team's headquarters to Danny the Street.

At the Lost & Found, a woman is groomed to convince Flex that she is his lost Dolores.

Retrieved from "https://heykidscomics.fandom.com/wiki/Doom_Patrol_Vol_2_42?oldid=1424273"
Community content is available under CC-BY-SA unless otherwise noted.