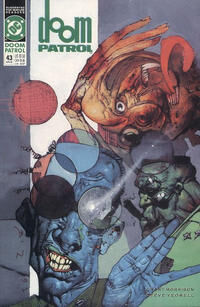 I guess they told you you'll be expected to dye your pubic hair green when you take up your post here? Itches like hell for a while, but it's a real interplanetary experience that'll make you feel sexy.

At the Pentagon, Sergent Washington is inducted into the ranks of those who work in the lower levels of the building - where the darker secrets are kept. In particular, the déjà vu room contains the Ka-Bala, an item which uses mystical power to dictate their every move. What lies even further down has been there for years. Their program got off the ground in 1943, but its central figure has existed since 1875, when Alexander Graham Bell summoned it with his first telephone message. The silver sugar tongs of legend are merely a tangible part of what is called the Dead Hand, which took Flight 19 from the air.

These tongs are able to take the husks of the dead and animate them as potential soldiers. In order to keep the soldiers in line, they are read to from Lucy Clifford's Anyhow Stories, which terrifies them. Afterwards, the husks are trained, and eventually they become the Men from N.O.W.H.E.R.E. General Honey introduces Washington to his charge, a Mr. Sage who once got entangled with Flex Mentallo after he wrote a comic book called My Greenest Adventure.

The heart of the operation is called the Ant Farm. Passing Washington a pair of X-Ray specs, General Honey explains that the ultimate mission of their department is the complete annihilation of all that is irrational. Together, they look into the Ant Farm, and Honey urges Washington to ask it why the Pentagon is shaped as it is.

On Danny the Street, Josh Clay and Dorothy Spinner are strolling and discussing their relationship with the commandeering Dr. Niles Caulder. Despite the Chief's seemingly impulsive decision to move their new headquarters to Danny, Dorothy likes it there. However, she spots an odd woman on the street, and points out that there is something unusual about her. Josh approaches her, and she introduces herself as Dolores Watson, and explains that she is seeking Flex Mentallo.

Elsewhere, The Chief and Sara Furness are arguing about the decision to use Danny as a mobile headquarters. They are interrupted when Josh and Dorothy usher in the woman claiming to be Dolores, and Flex leaps out of his chair to greet her. He notes that she doesn't look so well, but she assures him that she's fine, pulling his old costume out of her bag, and urging him to put it on. After a short wait, Flex emerges from his room wearing the skimpy speedo. Unfortunately, the garment did not return his power of Muscle Mystery to him.

Suddenly, Dolores begins to apologize and shy away from him. When he pursues her, she begins to age rapidly before his eyes, and manages only to utter that she loves him before she fades to dust. With horror and an overwhelming sense of loss, Flex realizes that the Men from N.O.W.H.E.R.E. have found him. Indeed, they appear within moments, and attack. They appear impervious to anyone's efforts to stop them, knocking Dorothy unconscious and carrying her away, as the others are impotent to stop it. The intruders knock the Chief from his wheelchair, and corner Josh against the wall. It is only the intervention of Cliff Steele and the others that gives the Man from N.O.W.H.E.R.E. pause.

Retrieved from "https://heykidscomics.fandom.com/wiki/Doom_Patrol_Vol_2_43?oldid=1424274"
Community content is available under CC-BY-SA unless otherwise noted.