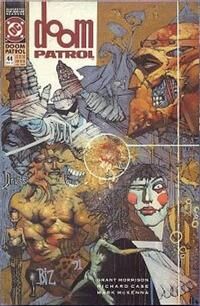 Why, I even heard the secret of the universe was printed in one issue of "Grit," but nobody ever read the damn thing.

Captured by the Men from N.O.W.H.E.R.E., Dorothy Spinner and Flex Mentallo realize that they have been taken to chambers hidden under the Pentagon. They are led down a series of hallways until finally meeting Major Honey and Sergeant Louis Washington, who is shaken by his visit to the Ant Farm.

The Major introduces himself, already well aware of Flex's reputation. He directs Flex's attention to a man called Wally Sage, whom he has vague memories of. The Major assures him that they will be reacquainted soon. Flex warns that his friends will soon be coming to rescue him, but the Major reminds him that there is no way in or out of this place - and besides, the Doom Patrol won't exist anymore, soon.

Having just been rescued from the Men from Nowhere by their recently returned friends, Josh Clay and The Chief are glad to see Cliff, Jane, and Rebis. They managed to capture one of the Men from N.O.W.H.E.R.E. for questioning, but are surprised and disgusted when he disintegrates before their eyes.

Knowing they must rescue Flex and Dorothy, the Chief is frustrated that he doesn't have enough time to prepare a break-in of that scale. The pressure is on him, though, as Josh reminds that Dorothy does not have a strong enough control of her abilities to defend herself with them. Frustrated at their whining, Sara Furness reminds that Danny the Street can get them in.

Confused, Flex wonders what Major Honey hopes to achieve, and why the Pentagon is the shape it is. Honey explains that the facility was built atop the remains of an older structure - the five-sided City of the White Abyss. The Pentagon acts as a lens to focus the energy from the fundamental reality hidden beneath it. As far as what he hopes to achieve, all he wants is control. By which he means the ability to exterminate all that is unusual from the world. Meanwhile, a supreme psychic talent is required to help control it all - a talent which Flex reminds that he no longer has. The Major comments that he was actually referring to Dorothy. Flex is required because Wally Sage put most of his power into him when he made him - another revelation. Eventually, they reach their destination - the Ant Farm - and Flex realizes that he has been there before.

The Ant Farm is a massive machine, growing all the time. It is intended as the blueprint for the new world of order, where every move will be predetermined, and there will be no room for oddities. Having explained all this, the Major and Sergeant leave Dorothy and Flex with the working Men from N.O.W.H.E.R.E. On their way out, Washington confides that he may not be cut out for this job, and the Major assures him that he has just been exposed to too much irrationality. The two men are surprised, though, when they stumble from the hallways of the lower Pentagon onto Danny the Street, where Cliff is waiting.

The Men from N.O.W.H.E.R.E. warn that the switchboard operators will take away Dorothy and Flex's thoughts. Suddenly, an alarm sounds, and they simply leave their prisoners alone. Flex is confused, but his attention is drawn by the plaintive cries of Wally Sage, who is trapped in some kind of machine. Quickly, Flex tears the door off of the machine, as Dorothy warns him to hurry, as they have caught the attention of the switchboard operators. Dying, Sage explains that Flex isn't real. He created him when he was seven years old as a comic book character in a book he called "My Greenest Adventure." The very power of his imagination, though, had brought Flex and all of his villains to life. As Wally dies, he uses his strong belief to return Flex's powers to him - just in time to prevent the switchboard operators from erasing Dorothy's thoughts. One of the beaten operators, though, reaches up to the switchboard, and calls on something called the Avatar, which begins to emerge from the Ant Farm.

The Avatar turns out to be some kind of monster comprised entirely of telephone components. Flex realizes that this is what has been haunting the telephone system for fifty years, and enslaving the dead. The pentagon was built solely to focus its power. Cliff appears to intervene in its attack on Flex and Dorothy, but he is knocked back. Flex, meanwhile, does all he can do: think.

Rebis, meanwhile, discovers Christmas Harry, bearing the fabled sugar tongs. Having been captured and bound, Louis Washington betrays his superior officer, warning that if they destroy the tongs, they'll be able to wound the Avatar. This is because the sugar tongs are the physical intrusion of the Avatar's dead hand. Using her Flaming Katy personality, Jane melts the tongs away in her hands, sending the Men from N.O.W.H.E.R.E. shrieking.

Confused by the creatures dropping like flies around them, Dorothy turns to Flex for answers, but he is so engrossed in thought that he can't hear her. He uses his muscle mystery to weaken the avatar, demanding that Dorothy kill it before it recovers. However, she can't bring herself to do it, and begs for help from somewhere.

Suddenly, Dorothy senses her own retreat into her imagination, and is frightened by that prospect. She finds herself sitting across from one of her imaginary friends, who promises that he can do what she cannot - and she must do it, or else the Avatar will win, and it will result in the death of imagination. Defeated, she admits that she just wants her friends to be safe, and for this ordeal to be over. He offers her a candle to make a wish on, and when she blows it out she is in Flex's arms. He is unsure of just what happened, but they look up to see that the Avatar has been hung round the neck with his own telephone cables. In tears, Dorothy chokes that he has hung up.

Retrieved from "https://heykidscomics.fandom.com/wiki/Doom_Patrol_Vol_2_44?oldid=1424275"
Community content is available under CC-BY-SA unless otherwise noted.