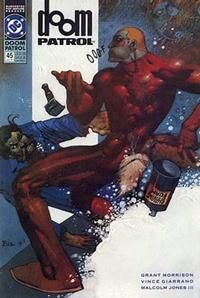 Appearing in "The Beard Hunter"Edit

Synopsis for "The Beard Hunter"Edit

From a rooftop, Ernest Franklin watches another man named David Sanchez through the scope of a sniper rifle, angry that Sanchez both has the gall to touch mint-to-near-mint comic books with his fingers while sporting a goatee, and to mouth off about how writer and artist Ron McMurray doesn't understand the elementary rules of grammar. This will not stand. Sanchez' brain is soon splattered over the side of his car, as Ernest Franklin pulls the trigger. Rushing down the steps to the parking lot, Ernest retrieves his ozone-friendly can of shaving cream, removes David's smug little goatee. Ernest Franklin is the Beard Hunter.

Ernest returns home to his mother who demands to know where he's been, since Doctor Proctor from the clinic was trying to call him about his tablets. Ernest reminds that she knows he was out on the street fighting his lonely war against facial hair. His mother responds that his time might be better spent trying to find a girlfriend - he needs more companionship than his German Shepherd Sheba can provide. After all, she wants grandchildren. In the meantime, she admits that she opened some mail of his, angering him, and eventually he has a fit, running off to his room.

In response to the letter that his mother opened, Ernest visits the Bearded Gentlemen's Club of Metropolis, where he is disgusted by his host's so-called "blue beard of happiness". He was further sickened to see that every mirror in the place had a realistic beard painted on it in order to teach beardless visitors the errors of their ways. His guide admits that several years ago, his organization attempted to introduce a beard-tonic into the reservoirs, but the authorities prevented it, threatening to disband the club - but they could not overcome the power of the beard. Naturally, this tour served only to increase Ernest's lust for blood and beardlessness.

The guide explains that his organization is now in conflict with one of its own: Niles Caulder. Years ago, Caulder lost the use of his beard, and they offered to buy it from it. Caulder had refused, calling them lunatics. Despite a clever and satirical poetic attack, the society does not feel as though its wounded pride has been properly avenged as yet. This is why they have stooped to hiring Ernest - a man whose philosophy and methods they abhor. Caulder is not fit to wear the noble beard. Ernest must bring them that beard by any means. Ernest responds that it would be his pleasure, secretly planning to return and take every beard in the place.

That night, Professor Caulder is visiting the local supermarket after hours, as they have been instructed by their manager to make things easier for him. A young man named Shaun helps him with the shopping, until he is suddenly shot in the gut from afar. Ernest rationalizes this death by considering that Shaun probably intended to grow a beard, at some point. Shouting, Ernest announces that he has come for Caulder's beard. He chases the wheelchair bound professor through the aisles, eventually unseating him. Thinking this is his chance, Ernest rushes forward, but suddenly slips in a puddle of sunflower oil - straight into a pyramid of canned goods. Grumpily, Ernest shrugs off the embarrassment by claiming that he showers in falling debris.

Unfortunately, at the moment of truth, Ernest can't seem to find his shaving cream. This is because Caulder has stolen it, and when Ernest turns his head, he gets an eye-ful of it. When he wipes it away, Caulder is gone. To console himself, Ernest tears open his shirt, covers his chest in sunflower oil, and assures himself that he looks very buff indeed.

Elsewhere, the police have arrived at the Franklin household, and Mrs. Franklin makes no attempt to conceal her son's instability, explaining that he hates beards because he can't grow his own. He has a male hormone deficiency that prevents it. She reveals that he has likely gone to Rhode Island to continue his war against facial hair, and she encourages the police to lock him up.

Ernest continues his search for Caulder, considering that once he is paid for this job, he will put the money into his self-published graphic novel about shaving. Meanwhile, Caulder uses the grocery supplies around him to create a trap, rerouting the wiring from a produce shelf onto a sheet of aluminum foil, which he buries under a layer of cornflakes. When Ernest Franklin discovers him, and steps onto the pile of cornflakes, he is filled with a powerful electrical jolt. In his electrocution-induced delirium, Ernest witnesses a vision of three heavenly, bearded visitors with a message. The message is that it is true that Ron McMurray's grasp of the English language is sub-par. Hearing this, Ernest realizes that God is supposed to have a beard, and loses consciousness.

Meanwhile, Caulder bides his time as he waits for help by eating a chocolate bar.

Retrieved from "https://heykidscomics.fandom.com/wiki/Doom_Patrol_Vol_2_45?oldid=1424276"
Community content is available under CC-BY-SA unless otherwise noted.