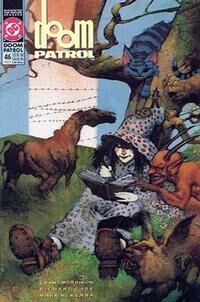 Several of those who have encountered the Doom Patrol have since met with happy endings. Harry Christmas, who was cursed by the Men from N.O.W.H.E.R.E. to write only nonsense prose has since found a niche for himself in that genre, becoming quite popular. Wallace Sage, the boy who created the character of Flex Mentallo is dead, but his mother recalls him as a fine boy, and he left her instructions to set off fireworks and release a flock of birds at his grave, which she does, in addition to leaving a bunch of gardening tools wrapped in newspaper for the perfect send-off. Sergeant Washington is now a popular headlining Burlesque singer at a theatre called Peeping Tom's. Major Honey has been seeing a psychiatrist, who, despite being diagnosed as an anally-fizated oedipal paranoid with south-of-the-border schizophrenic delusions intends to run for president. Sara Furness has finally returned home from Danny the Street after all of the excitement at the Pentagon, and intends to do some gardening. Flex Mentallo intends to set an example for all of the grim and gritty super-heroes by becoming America's merriest crimefighter, now that he's real.

Back at the Doom Patrol Secret Sanctuary, Cliff Steel tries out a new robotic body that has a more nostalgic design, courtesy of The Chief, who assures him that this body surpasses Dr. Magnus last design in every aspect. Naturally, the Chief suggests that Cliff use this improved body to start moving the boxes that have been packed for their move to Danny the Street. On his way down the stairs with a box, Cliff passes Dorothy Spinner, who seems to be upset, but she won't tell him anything about it.

Dorothy passes by and returns to her room, where she struggles to deal with her imaginary friends encroaching on her real life - particularly after what she allowed them to do.

Meanwhile, Josh Clay is a little nostalgic for their headquarters as they are intending to move out, despite the fact that he had intended to leave the Doom Patrol just when they had moved in to this place. Despite the move to Danny, Caulder plans to keep his lab active on the mountain for private research.

On Danny the Street, Cliff asks his friend Crazy Jane what she thinks of his new body, and she responds that she doesn't care what he looks like, as she likes him for who he is. She announces that she has been working on a logo for the Doom Patrol, and presents him with a design that combines a D and a P. Setting the logo aside, she remarks that it would be nice during this downtime to go somewhere and just talk, for once. Cliff is amenable, and with Danny's help, they take a walk from the street to the forest. Cliff knows he's not talking to Jane, but rather one of her personalities, and questions her. Jane explains that she is now Liza Radley - a new personality that Cliff helped bring out.

Cliff and Liza find themselves in a beautiful land of green grass, sea-salt air, and castles, and Cliff is surprised to find that his new body allows him to experience those, for the first time since becoming a robotman. Liza claims that she can feel again, too - thanks to Cliff. Jane had never let anyone get close to her, until he came along and entered her underground. He had saved Jane that day, and gave Liza the strength to show herself as the first of Kay Challis' personalities to manifest itself to love instead of cruelty. Soon, though, the other personalities prevent her from saying what she was really trying to say to him, and her lovely hat floats off in the breeze, over the edge of a cliff.

Back in the Chief's lab, he is interrupted by Rebis, who demands that they be allowed to talk when the Chief isn't busy anymore. Rebis has an interest in the Chief's recent work, and Caulder explains that he is almost finished working on his colloidal super-computer, which will make even the most sophisticated CRAY machine look ancient in comparison. He intends to call it the Think Tank. Rebis confides that it knows what Caulder intends to do with the Think Tank, and may have to stop him, at some point. Caulder resigns himself to this fact, and offers Rebis a piece of chocolate.

Elsewhere, a man called Doctor Silence arrives at a fancy mansion, where he is shown to the storeroom. He has been invited there to potentially purchase an item before it goes to auction; an item from the infamous Eismann collection. It is a painting of great power.

Cliff turns to Jane and explains that her hope for him is misplaced, as he has now resigned himself to the fact that he will never be human again. She may have hope. She could get better, but he will always be a robot-man. She can't help him change that, as much as he appreciates the effort. Jane places her hand on his cheek and tells him that love and life mean nothing at all.

Cliff and Jane return to the headquarters and find Rebis in a hallway, crying. When Cliff rushes to find out what's wrong, Rebis recovers, explaining that it was simply practising. The moment is interrupted then by the sound of the alarms, and Cliff abandons Rebis to seek out the Chief. Though Caulder appears to be fine, the thing that breached security is a confusing sight in itself.

Retrieved from "https://heykidscomics.fandom.com/wiki/Doom_Patrol_Vol_2_46?oldid=1424277"
Community content is available under CC-BY-SA unless otherwise noted.