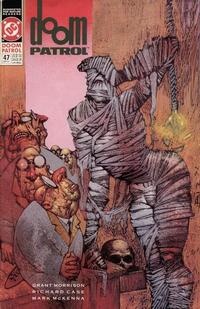 You really must stop acting the part of the baffled-but-good-hearted layman, Cliff. People will begin to believe you.

Appearing in "The World, The Flesh, and The Devil"Edit

Synopsis for "The World, The Flesh, and The Devil"Edit

Willoughby Kipling is convalescing in Berlin after a harrowing battle with the Mouth of Outrage. The place he has chosen to do so happens to be a brothel which satisfies a particular clientele who can only receive sexual gratification at the hands of ghosts. A shadowy figure in a cowl approaches him, rumouring that the war between Heaven and Hell has brought about the return of the mysterious Mr. Evans. Mr. Evans is known to be one of the signs and portents of the apocalypse. This news is unwelcome to Willoughby, though his solution to the problem is typical: he gets very, very drunk.

Meanwhile, at Doom Patrol Headquarters, the intruder that breached their security is perplexing. Appearing garbed like a superhero wit ha massive clock tower for its head, it simply repeats the phrase "is it that time already?" over and over. In fact, it's beginning to annoy the Doom Patrol, given that it doesn't seem inclined to do much else. Finally, The Chief has an epiphany, and asks Cliff Steele to change his visual spectrum, and analyze the visitor. The results are surprising: this thing is nothing more than a cloud of gas - ionized air, the Chief clarifies. Soon, the intruder simply dissipates, to their confusion.

The Chief explains that the cloud was generated by a piezo-electrical discharge from the quartz deposits in the mountain, which can cause hallucinations by altering the electrical activity of the brain. Rebis suggests that they all saw the saem thing because there was some guiding principal at work behind the generation of the image. With that, the Chief takes his leave, explaining that they will just have to wait until the next manifestation if they want to learn more. He asks that he not be disturbed for the next five hours without explanation, and so Crazy Jane invites Cliff to have some coffee with her in the interim, and he accepts.

Meanwhile, Josh Clay receives an unpleasant phone call. Uncomfortably, he seeks out Rebis, who is attempting to understand the metaphor of the Russian dolls. Josh explains that the hospital called to tell him that Rebis' mother died last night of a heart attack. Rebis' response is to ask which mother, frustrating Josh, who is already uncomfortable. The man shouts that it is Larry Trainor's mother who died. Rebis responds that Mrs. Trainor was an old woman, and it was her time, but he thanks Josh all the same. After Josh has gone, Rebis regrets not seeing her before she died.

Somewhere, Doctor Silence stares into the painting he bought from the Eismann collection.

On their coffee date, Jane explains that because of the emergence of her new personality Liza Radley, things are going to become strange with her. The other personalities of the underground are, for the most part, skewed toward the negative, but Liza is a positive aspect of Jane's personality. The others may try to fight her. As she says this, one of those personalities takes over, and warns that Liza Radley is dangerous. Even so, Cliff insists he will do what he can to help Jane. Returning to her Liza personality, Jane stands, announcing that it is time for something particular. Cliff doesn't know what she's talking about, but he allows her to go.

Rebis, too, thinks it's time. It removes its clothes and sunglasses, admitting fear as it peels away the wrappings that covered its body. From within, bugs and dirt fall to the floor, and Rebis wonders that its body is such a mess.

Meanwhile, Mr. Evans bemoans the fact that he will have to be returning to the physical plane.

Soon, Jane returns from the washroom, dressed in very provocative attire and a wig. The change leaves Cliff flabbergasted, and he wonders if she's feeling okay. She warns him not to call her Jane. She is different from Jane - more open than Jane. Jane needs to get laid good an hard, she says, putting out a cigarette on her thigh. Concerned, Cliff yanks her hand away, and she wonders if he'd be interested in having sex with her there and then. Angrily, Cliff suggests that they go somewhere and talk about this change, and drags her out of the café. Jane rushes out ahead of him, and begins trying to solicit sex from everyone and anyone who might want it, and when she can't find anyone who's interested, she begins calling them all faggots.

Cliff tries to stop her, but they are startled by the even more unsettling arrival of Mr. Evans.

Retrieved from "https://heykidscomics.fandom.com/wiki/Doom_Patrol_Vol_2_47?oldid=1424278"
Community content is available under CC-BY-SA unless otherwise noted.