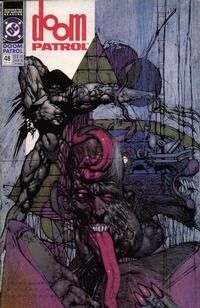 You're going to be the guy they found in five pieces unless you give me some answers, pal!

The town of Happy Harbor has been overcome by something of a sex-mania, which has prompted the intervention of the Sex Men. They determine from a cursory inspection that the craze is the result of a major dream transplant, in which a malignant dream is transplanted into a healthy dream, where the bad dream overwhelms its host. In this case, that malignant dream was a sex dream. They could stop it - if they could find the cause.

The cause is the mysterious and apocalyptic Mr. Evans, who is quite pleased with the scene of wanton, unchained libido that he has produced. His glee is stifled, though, by the sudden appearance of Cliff Steele. Knowing that Evans is responsible for something bad, Cliff demands to know just who he is.

Meanwhile, at Doom Patrol Headquarters, Josh Clay finds The Chief using his hyper-hat; a device which allows him to connect his consciousness with every point in the known universe. As such, the Chief already knows what news Josh has to deliver: Cliff and Jane are in trouble. Within moments, Josh, the Chief, and Dorothy Spinner are decked out in their new Doom Patrol uniforms, and riding to the scene in their equally new Doom Saloon. When they arrive at Cliff's side, they caress and embrace him instead of rescuing him. Suddenly, Cliff snaps out of it, realizing that the whole incident had been a dream that Mr. Evans had concocted for him. Fortunately, despite the fact that Cliff's friends aren't there to save him, the Sex Men are.

Meanwhile, in Venice, Doctor Silence looks with horror at the painting he bought, as a stain has formed in one of its corners. His horror increases, though, when he realizes that the stain has got bigger.

Unfortunately, Captain Cuddle is quickly decapitated by Mr. Evans, who cares little for the Sex Men and their attempts to thwart his city-wide sex dream. Angrily, Cliff rushes forward demanding answers. Mr. Evans throws up his arms gleefully, claiming that he is Satan. Cliff reacts with disbelief, and Captain Kiss decides it is time to take Evans in. With a snap of his fingers, though, Evans has them all riding a roller coaster, on a fast-paced tour of how repression affects humans. It makes them sick; sick with shame and guilt, or worse.

The ride reaches its end in the bedroom of Crazy Jane, who's recent transformation into a sex-kitten has not reverted in the interim. She introduces herself as Scarlet Harlot - one of Jane's personalities, and, apparently not one of the manifestations of Evans' sex-dream. From nearby, Cliff hears a voice calling for help, and finds a man called Donald sitting strapped in a chair. Donald is being punished for criticizing Mr. Evans' singing, and feels he deserves it, but even so, he is eager to share with Cliff the way to defeat his punisher. He must get Evans to say five words in reverse order: Lotter, Sheet Music, Single-handed, Kneecap.

While Jane desperately seeks one of the assembled to have sex with her, and they resist, because she comes on too strongly, Cliff returns claiming that Donald has promised that Mr. Evans is a great singer. As such, he produces a piece of paper with the lyrics to what he claims is his favourite song. Eagerly, Evans sings out the words, realizing too late that he has said the words that can undo all of his work. Angrily, he swears that he will return as his body disappears into unreality. In order to resolve Happy Harbor's mass sex-dream problem, Jane agrees to absorb it into her own mind, thereby satisfying her need for sex - if only in her dreams. With everything taken care of, then, the Sex Men take their leave.

Cliff and Jane return to HQ to find Josh concerned about Rebis, who can't seem to get the door to its room open. Concerned, Cliff breaks the door down, and they are all disturbed to see that Rebis' body has completely crumbled away, and all that remains is a gaping void of negative energy

Retrieved from "https://heykidscomics.fandom.com/wiki/Doom_Patrol_Vol_2_48?oldid=1424279"
Community content is available under CC-BY-SA unless otherwise noted.