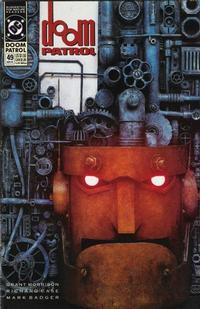 It's my ashes. After my accident, I had 'em put my ashes in that jar. Guess I'm just sentimental.

Appearing in "Death in Venice"Edit

Synopsis for "Death in Venice"Edit

Bobby Carmichael wakes from an unusual dream to find that he has no arms, and his only means of interacting with the world is through a strange glove - one he had seen in his dreams - that acts in place of his missing hands. When he uses it, he feels as though everything is love.

At Doom Patrol Headquarters, The Chief examines the void of negative energy that fills Rebis' room, and has done so for two weeks. The Chief determines that whatever they are looking at, it appears to be Rebis, and Rebis appears to be enjoying itself. They decide to leave Rebis to whatever it is doing, cordoning off the door to prevent access. In the meantime, the Justice League is scheduled to move back into the base, and the Chief's only concern is that they leave his lab, his affairs, and Rebis alone.

Meanwhile, on Danny the Street, Cliff Steele and Crazy Jane relax listening to an old vinyl record that Cliff happened to find. Jane's typical personality has been pushed aside for the moment, as there is construction going on in the Underground - modernization that has already seen two of the stations within merged. Cliff realizes that two of Jane's personalities must therefore also have been merged, and this is confirmed when he sees that the personality that was previously Scarlet Harlot has now merged with one of Jane's childlike personalities.

Meanwhile, in Venice, Doctor Silence has decided that the stain on the painting needs to be destroyed, but the jar of paint-thinner he brought with him drops to the floor when the stain speaks, warning him not to do it.

Once, a beautiful German actress became so obsessed with her own appearance that she fell in love with her own reflection. When that reflection seemed to grow old, though, she conspired to murder it, and threw acid on the glass. She was rewarded with the image of a deformed face screaming in horror, and when she realized it was her own, she shot her brains out, and ended up on life support in Bremen. Some time later, though, a boy woke the murdered mirror from its sleep, and now it rises again as Alias the Blur.

Meanwhile, a man called Agent "!" is walking the streets of Venice, and his defining feature is that absolutely nothing about him comes as a surprise. It is only after he has gone that he elicits any responses of surprise. On the street, he meets Bobby Carmichael, who now calls himself the Love Glove. Apparently, they both had dreams that suggested they come to this place, and as they look around, they see Alias the Blur approaching, and realize that it must have had a similar dream.

Doctor Silence threatens the painting, out of fear and rage, but he is startled to hear the voice of Agent "!" mocking him. He claims he and his companions were invited there. Enraged that they have invaded his house without and invitation from him, Silence rushes forward, but he is knocked back by the Love Glove. Turning to the painting, each of the three gathered weirdos recite a part of the poem they heard in their dreams, and it seem to activate the stain on the painting. With the final line spoken, the stain pulls itself from the painting and emerges; Mr. Nobody has returned!

Nobody explains that it was Doctor Silence's obsession with the stain that he was which gave him the power to pull himself free of the painting. Now that he is free, he has no need of Doctor Silence anymore. He removes the mask from the man's face, and remarks that he is quite handsome, suggesting further that he examine his own reflection within the Alias the Blur's face. Pleading, Silence claims that if he sees his own face, he will cease to exist. The Love Glove forces him to look, and all Doctor Silence can do is beg to squeeze the pimple on his nose before he disappears from existence.

Bobby seems unwilling to part with the empty cloak that Silence had worn, and so Mr. Nobody agrees to marry them to each other. With that out of the way, Nobody is eager to get a move on with his plans, but they are still waiting on two more members to appear. In the meantime, he leads them Silence's trophy room, where they begin to search for some kind of item that will be the basis for their next attack on reality. Nobody's eyes fall on a unique item - the bicycle of Albert Hofmann - and declares that it will do perfectly.

Retrieved from "https://heykidscomics.fandom.com/wiki/Doom_Patrol_Vol_2_49?oldid=1424280"
Community content is available under CC-BY-SA unless otherwise noted.