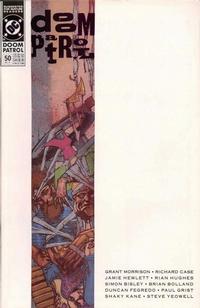 This is brilliant! Just this morning, I was expecting to get up and sign on and hang around the record shops all day and now... Now I'm a super-villain!

Appearing in "Tales of Hofmann"Edit

Synopsis for "Tales of Hofmann"Edit

While working on the development of a new migraine control drug, Albert Hoffman stumbled upon the hallucinogenic properties of his synthesized for lysergic acid diethylamide. Following his curiosity's driving force, he experimented with it. Feeling few effects at first, he decided to ride his bicycle home, accompanied by an assistant. His hallucinations began to turn the ride into something of a detour.

Mister Nobody has selected Hofmann's bicycle as the next item which will serve as the basis for his new Brotherhood of Dada's next attack on reality. He explains that while Hofmann's discovery of LSD is what he is remembered for, his bicycle was sadly forgotten by all but a few aficionados of the bizarre. The bicycle had become super-charged with the energies of that first ground-breaking acid trip. It had become a consciousness-altering device of outrageous potency, to be bought and sold by collectors. When ridden, the bicycle leaves a trail of hallucination in its wake, affecting those it passes by.

With the plan to steal the bike in place, Agent "!" wonders where the other two members of their team are. He is interrupted when he accidentally bumps into a door that hadn't been there before. Mister Nobody realizes that Number None has arrived, explaining that Number None is the agent of every small annoyance - the man who bumps into you on the street, the chair that collapses underneath you when you're trying to make a good impression, the thin man who somehow takes up most of the sidewalk. With Number None among their ranks, they are prepared to go out as the New New New Brotherhood of Dada.

On Danny the Street, Josh Clay informs Cliff Steele of some strange activity in Italy, and though he doesn't want to believe it, all signs point to the return of the Brotherhood of Dada, whom they thought trapped within the Painting That Ate Paris. He is surprised when Rebis appears, offering help. It is surprising on account of the fact that Rebis has spent weeks having sex with itself. Uncomfortably, Cliff welcomes Rebis back, and asks Danny to take them to Venice.

They arrive in time to find the majority of the Brotherhood of Dada tripping balls. Unconcerned, Cliff delegates Rebis and Crazy Jane to see what their deal is, while he seeks out the American Embassy. Rebis endeavours to speak with the newcomers, but finds himself on the receiving end of the Love Glove's "Shove Glove". Annoyed, Jane decides to give them what-for, and winds up slipping on a banana peel, courtesy of Number None.

After having seen what Mister Nobody did to the embassy, Cliff finds him planning the rebirth of Venice as something entirely changing. Annoyed to be found out, Nobody races around Cliff on his bike, hoping to cause him to hallucinate as well. Fortunately, Cliff's robot body affords him the ability to change his brain chemistry on command, and he can counteract the effects. He explains to Mister Nobody that despite the delirious smiles all over the city, not everyone is having a good time, rushing to calm a woman who has been overcome by paranoia. To counter him, Nobody brings a building to life, and it knocks Cliff into the canal. Mercifully, though, he points out that it's just a building, so that the woman can smile, and goes on his way.

After stealing a bus for them all, Nobody reconnects with the rest of the Brotherhood, announcing that they should leave before the Doom Patrol actually becomes a threat. However, before they leave, he intends to kidnap Danny the Street. He takes a hostage in one of Danny's drunken residents, and explains that the Brotherhood and the Doom Patrol share goals. There is no need to defend a world that has become sick with reason. With that, the Brotherhood escapes with Danny in its possession. Cliff returns too late to stop it all, complaining that it only took five minutes for everything to go wrong - and he is particularly troubled by the worry that Mister Nobody might have been right about them.

Later, in the New Mexican desert, Mister Nobody reveals his plan to make the whole world resemble the universe inside the Painting That Ate Paris. In order to facilitate that plan, he intends to become the President of the United States.

Retrieved from "https://heykidscomics.fandom.com/wiki/Doom_Patrol_Vol_2_50?oldid=1424281"
Community content is available under CC-BY-SA unless otherwise noted.