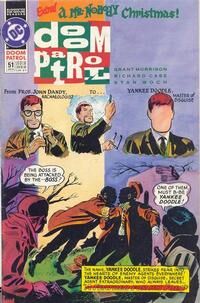 You learn something new and dumb every day.

Having attached Albert Hoffman's Bicycle to a bus, the Brotherhood of Dada began travelling across the country spreading the bicycle's hallucinogenic effect under the auspices of a presidential campaign.

Meanwhile, Cliff Steele is a little worried for Danny the Street, concerned that the Brotherhood might have done something terrible to him when they hijacked him. Danny assures Cliff and Crazy Jane that he is fine.

Dorothy Spinner, though, is not, and Josh Clay is frustrated that she won't talk to him about what's bothering her. Ever since they faced danger together at the Pentagon, Dorothy hasn't quite been herself, and it worries him. Even so, she remains silent, and he is forced to leave with the promise that if she changes her mind, he will be there to listen. What is bothering her is the fact that her imaginary friends have come back.

At the Pentagon, a Ms. Roddick of the FBI hopes to get some advice on how to handle the threat that Mr. Nobody and the Brotherhood of Dada pose to the country. Despite having caused all kinds of chaos, they have committed no specific crimes. Ms. Roddick hopes that they will be able to use John Dandy to fight fire with fire.

Before long, Mr. Nobody and the Brotherhood broadcast a message for their campaign, using a madman in an insane asylum as a man-on-the-street interview to attest to Nobody's character and leadership potential. Watching together, Cliff and Jane can't figure out how Nobody keeps getting away with making such ridiculous campaign videos and actually winning favour with the public. And just like the FBI, Cliff can't figure out what to do about it. Jane comments that Mr. Nobody is just giving the people what they want. He is admitting that the whole political system is a circus, and it's about time there was a president who wasn't rotten to the core.

Major Main admits that while Mr. Nobody will never achieve presidency, his popular support is a threat, and he must be stopped. Agents have already been sent to work on the weak link that exists in The Love Glove.

From the advertisements, Cliff has learned that the Brotherhood intends to turn up at a rally in Washington, D.C. tomorrow. Danny can get the Doom Patrol there tonight to prepare for their arrival. He is surprised, though, when Jane refuses to fight the Brotherhood. Rebis refuses as well, given that he plans to leave in order to experience the Aenigma Regis - the next stage of his life-cycle. Annoyed, Cliff responds that if they don't help him - if they don't do anything to stop the Brotherhood, then the Brotherhood is right. There is no meaning in anything. He can't live that way. As he determinedly decides to go by himself, Cliff receives some unexpected support from Josh, who had retired from super-heroism to this point.

Meanwhile, Major Main explains to Ms. Roddick that John Dandy used to work as a special government agent with the Pentagon's Unusual Operatives division, who oversaw the Men from N.O.W.H.E.R.E., the Sex Men, the Dust Devils and others. He used his cover as an archaeology professor to steal research notes that helped him synthesize a special gas which solidified on contact with air, creating a malleable super-skin. He stored this gas in a ball-point pen. That super-skin could be moulded into life-like masks which made him a master of disguise. With the codename Yankee Doodle, he worked for the government until someone within realized the craziness going on under the Pentagon and stole sensitive documents from it. John Dandy volunteered to get them back. It was a year before he returned from the abyss, and attacked two of the soldiers who discovered him. He was placed, from that point on, in a locked room. The same room that Major Main and Ms. Roddick are now preparing to enter.

Retrieved from "https://heykidscomics.fandom.com/wiki/Doom_Patrol_Vol_2_51?oldid=1424282"
Community content is available under CC-BY-SA unless otherwise noted.