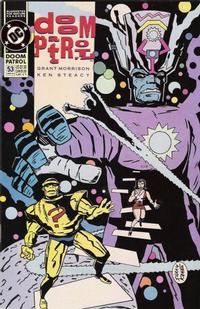 Cliff seems in a foul mood, Larry. I hope he's not going to let us down.

Appearing in "And Men Shall Call Him - Hero!"Edit

Synopsis for "And Men Shall Call Him - Hero!"Edit

As dusk falls on Danny the Street, he sleeps, and he dreams:

On the far edges of the known universe are the supernatural guardians of the planet Earth; the Mighty Mystics. From their satellite, the Hand of Warning, Hellblazer keeps watch gloomily over mankind. Unfortunately, something big is headed his way, and the Phantom Stranger warns that this threat could be more dangerous than any they have yet faced. As such, he has called the others for help. Among them are Doctor Thirteen, the Multiple Man and Mr. E, the Malleable Medium. Hellblazer explains that a massive aetheric power source is gathering at the threshold of the multidimensions. He suspects that something is waiting to force its way in at its moment of conjunction. They will need further help to deal with it.

So, Doctor Thirteen sends for his other twelve multiples, who soon arrive on Man-Hattan Island, home of the Legion of the Strange. There, a battle is already under way. Automaton fights the Negative Man, as unbeknownst to the others, the brain inside Automaton's body is not Cliff Steele's, but that of Norman Caesar, an embittered scientist, tired of living in the shadow of Niles Caulder, with whom he shares his initials. As he tries to squeeze the life out of Negative Man, Elastiwoman is forced to tear them apart, chastising "Cliff" for his behaviour.

Though Caesar tires of the charade, the call of the Action-Klaxion signals that the Chief wants their attention. Having spoken to the Mighty Mystics, he has agreed to send the Legion of the Strange to help fight the weirdness in space. But first, they must investigate a connected event. A tenement building in the Bronx seems to be warping into superspace. Though they do not know what they will find there, they do know one being who might know: The Living Guru, advisor to Celestius, the Man-God.

Celestius had been trapped in superspace by the elderly gods during the last dimensional concurrence, eons ago, having done no wrong but to create an alternate Earth on the far side of the sun. For that, he was imprisoned behind the Wonderwall. Soon, though, he will be free'.

In the Bronx, the Legionnaires investigate the strange building, though Automaton's companions are beginning to suspect something is wrong with him. Inside, though, he is distracted by the call of a young blind girl. Feeling her implicit trust, he senses a change within him, but he has little time to think on it as the roses on the wall-paper start to become real, and collapse into a vortex of chaos from which Celestius emerges; free. Seeking flesh to sustain him, he demands the child.

As Elastiwoman and Negative Man rescue the other inhabitants, they are suddenly blasted back by an explosion from within the tenement building.

Inside, Automaton defends the girl with his fists, knowing that he is no match for Celestius. Even so, he refuses to give up, thrusting Celestius back toward the open portal that will send him into the destructive flux of the multi-dimensions during the period of conjunction - nothing will survive passing through it again. This, of course, is exactly Automaton's plan. However, in their struggle, he too is thrown into the void, and the portal closes behind them. Having watched their descent into the void, the girl got a glimpse into the infinite, which bestowed the gift of sight upon her, but her saviour was gone.

Finally, the rest of the Legionnaires arrive, and find their friend gone. The Chief explains, though, that it was never their friend Cliff. Cliff's brain had been in a jar in his possession the whole time. Whoever had taken his place is long gone, and may have redeemed himself of whatever had driven him to take over Cliff's body in the first place. He had died a hero, after all.

Though the story had a happy ending, Danny's dreaming has a bonus feature: The Secrets of Man-Hattan Island.

Having been out of commission for most of the previous story, Cliff Steele now has the opportunity to show readers around the headquarters on Man-Hattan island. In the head of the island, the Chief creates his gadgets and inventions to use against Super-villains. There, he finds the Chief, expecting him to be creating some fancy gizmo, but in fact, he is merely boiling an egg. ♪Wahn Wahn Waaaaaaah!♪

Retrieved from "https://heykidscomics.fandom.com/wiki/Doom_Patrol_Vol_2_53?oldid=1424284"
Community content is available under CC-BY-SA unless otherwise noted.