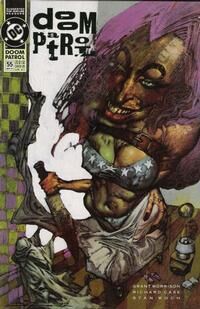 You heard the man, Danny! Let's hit the road!

Appearing in "The Blood of the Lamb"Edit

Synopsis for "The Blood of the Lamb"Edit

Dorothy Spinner has her first period and freaks out.

Elsewhere, Willoughby Kipling is summoned by an agent of the Templars. Cliff Steele and Joshua Clay go to Crazy Jane's room and find that she hasn't slept in her bed. They find a note from her father stating that he is coming to find Jane.

Jane sits in a plane headed for Metropolis.

Cliff and Joshua are discussing what to do when Dorothy arrives and tells them she needs their help. She tells them that she summoned an image called The Candlemaker and now it won't go away. Danny the Street drops Joshua and Dorothy off at the Doom Patrol headquarters in Rhode Island. Joshua and Dorothy are walking through one of the corridors in the headquarters when Dorothy has some kind of seizure.

Meanwhile, in Metropolis, Jane has returned to the church where her father sexually assaulted her and is reliving the incident. A police officer arrives and offers assistance.

At the Doom Patrol headquarters, Joshua rushes to get Caulder to help Dorothy and when he gets to Caulder's office, is shot in the heart.

Retrieved from "https://heykidscomics.fandom.com/wiki/Doom_Patrol_Vol_2_55?oldid=1424286"
Community content is available under CC-BY-SA unless otherwise noted.