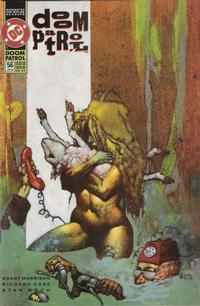 I haven't finished my jigsaw. I haven't.

Appearing in "Down in the Well"Edit

Synopsis for "Down in the Well"Edit

In Metropolis, Crazy Jane has downed a police officer and is holed up in the church where her father sexually assaulted her as a child. The Metropolis police have the place surrounded and tell Jane to come out of the church or they will come in. Allowing one of her superpowered personalities to take over, Jane flies out of the church and destroys a police car with a burst of energy. She injures the police gathered there and destroys their cruisers.


Cliff Steele discovers that Jane's father is already dead and that the person who wrote the note that he found in her room was actually Jane. One of Jane's previous doctor's suggests Cliff try looking in Metropolis for Jane.


At the Templar meeting, Willoughby Kipling learns that the Doom Patrol has become the focus of the first wave of Armageddon and Kipling has been chosen by the Templars to help them.


Crazy Jane returns to her farm and goes down the well, her father used to threaten her with. She finds her stuffed lamb, that her father threw down the well as a warning of what would happen to her if she told anyone he was sexually assaulting her.


In the city, Cliff speaks with the police and learns about Jane's rampage at the church. Cliff returns to Doom Patrol headquarters and finds Josh dead and and Professor Niles Caulder's wheelchair empty. Cliff turns around and sees Caulder standing upright, holding a revolver.

Retrieved from "https://heykidscomics.fandom.com/wiki/Doom_Patrol_Vol_2_56?oldid=1424287"
Community content is available under CC-BY-SA unless otherwise noted.