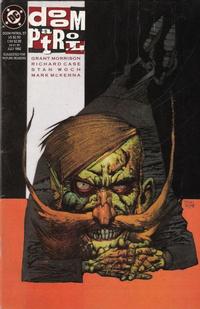 Cliff. Cliff! What are you talking about, Cliff? Surely it's obvious? I killed Joshua. It was me.

Appearing in "The Nature of the Catastrophe"Edit

Synopsis for "The Nature of the Catastrophe"Edit

Professor Niles Caulder tells Cliff Steele to come with him. Cliff objects that they can't leave Joshua Clay and Caulder replies that Joshua is dead and repeats his request. Cliff asks Caulder for an explanation and Caulder takes Cliff to his lab and shows him the supercomputer he built, called the Think Tank. While Caulder is showing his creation to Cliff he admits that he killed Joshua.


Back in Caulder's lab, Cliff attacks Caulder and Caulder immobilizes him with a handheld device.


Back in Caulder's lab, Caulder tells the immobile Cliff that he has created new life and he reveals the cybernetic man. Caulder also explains how he contrived to bring together the members of the Doom Patrol so he could use them to further his own creations and scientific experiments. This was when he staged his own death.


The Canlemaker takes control of the cybernetic lifeform Caulder created and decapitates Caulder. Then it removes Cliff's brain from the robotic body, throws it on the ground and stomps the brain into pieces.

Retrieved from "https://heykidscomics.fandom.com/wiki/Doom_Patrol_Vol_2_57?oldid=1424288"
Community content is available under CC-BY-SA unless otherwise noted.