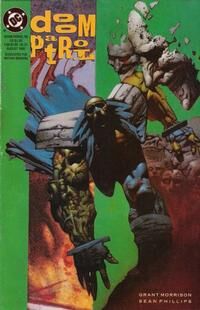 See? Didn't I tell you he wasn't dead?

Appearing in "In the Wonderful Land of Clockwork"Edit

Synopsis for "In the Wonderful Land of Clockwork"Edit

Cliff Steele remembers large portions of his life. Suddenly he awakens in an old robotic body. He sees Willoughby Kipling and Dorothy Spinner standing before him. Dorothy tells Cliff that the Candlemaker is loose. Kipling tells Cliff that Caulder downloaded Cliff's mind into his supercomputer. Kipling put it all on disc and transferred it into Cliff's new body. Danny the Street takes them to New York to confront the Candlemaker.

Retrieved from "https://heykidscomics.fandom.com/wiki/Doom_Patrol_Vol_2_58?oldid=1424289"
Community content is available under CC-BY-SA unless otherwise noted.