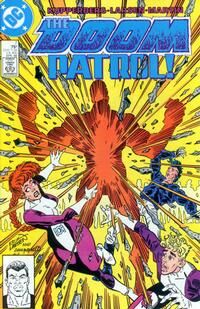 Appearing in "The Kids' Night Out!"Edit

Synopsis for "The Kids' Night Out!"Edit

Wayne Hawkins, Rhea Jones, and Scott Fischer all agree to go out on the town in the evening. Negative Man, still powerless, seeks a way to regain his powers. That afternoon, Shrapnel arrives in town for a job and when he is spotted and cops try to capture him, he explodes, making good his escape.


That night, Wayne, Rhea, and Scott find a nightclub to enjoy. Across town, Shrapnel kills a man. At the nightclub, Wayne hits on a girl and gets into a fight with her boyfriend. Across town, Shrapnel escapes the scene of his crime. Back at the nightclub, Wayne, Rhea, and Scott walk outside and Wayne bumps into a police officer who realizes Wayne looks a lot like a murder suspect. The police chase Wayne down the street. Wayne dives into the deep snow in an alleyway and the police pass right past him. When Wayne gets up, he finds Shrapnel looming over him. By this time, Rhea and Scott have arrived and they help Wayne fight Shrapnel. Shrapnel easily overcomes them and escapes. Rhea, Scott, and Wayne return to headquarters to find that the rest of the Doom Patrol has returned from their away mission and they tell the team about Shrapnel.

Retrieved from "https://heykidscomics.fandom.com/wiki/Doom_Patrol_Vol_2_7?oldid=1424237"
Community content is available under CC-BY-SA unless otherwise noted.