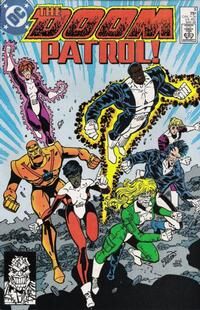 Appearing in "The Morning After"Edit

Synopsis for "The Morning After"Edit

The morning after Shrapnel's confrontation with the junior members of the Doom Patrol, the Doom Patrol and Kansas police investigate the crime scene and find a piece of Shrapnel embedded in the alley wall. The Doom Patrol take it back to their headquarters for analysis.

Meanwhile, Shrapnel watches the news and sees that he is wanted for nine deaths and that the whole city is looking for him. Shrapnel disguises himself and leaves his motel room, intent on an assassination job.

Meanwhile, at city councilman Arvid E. Reynolds' office, a man appears claiming to represent a group of people who oppose the Doom Patrol's presence in Kansas City. He bribes Reynold's to introduce a bill to that effect to the city council.

Back at Doom Patrol headquarters, Val Vostok approaches Larry Trainor to talk with him about her acquiring his abilities. Trainor loses control and rages at Vostok, manhandling her. Vostok flees the room and Trainor vows he will get his powers back from her.

Tempest and Scott go to the lab to analyze the piece of Shrapnel. The same man who paid off the city councilman, pays off a man to organize a protest outside Doom Patrol headquarters.

Elsewhere, at the offices of Walter Williamson, Shrapnel appears and reveals his personal connection to Williamson. Then he explodes, killing Williamson. Shrapnel smashes his way through the office building to the garage below, where several police cars are waiting for him.

The Doom Patrol hear about the confrontation on a police scanner and head to the building where they fight Shrapnel. During the battle, Shrapnel explodes, bringing the roof down on himself.

Back at Doom Patrol headquarters, after things have settled down, Cliff Steele confronts Hawkins about his past. Steele has discovered from talking to the police, that Hawkins matches the description of someone they are seeking in connection to a murder. Hawkins tells Steele that he has a juvenile record for burglary but he has never murdered anyone. Steele tells Hawkins he has to think about things a little more, before he decides what to do with this information.

Retrieved from "https://heykidscomics.fandom.com/wiki/Doom_Patrol_Vol_2_8?oldid=1424238"
Community content is available under CC-BY-SA unless otherwise noted.