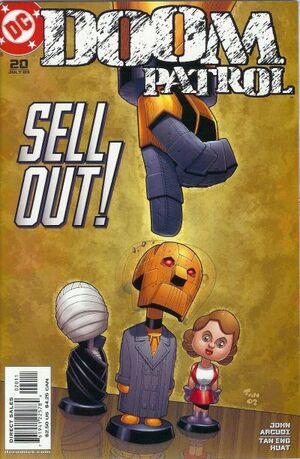 Let’s see what ratings are like and then we’ll talk about ElastiGirl herbal breast augmenter, okay?

Appearing in "What Is Drama?"Edit

Synopsis for "What Is Drama?"Edit

As part of the rampant marketing that the Doom Patrol has allowed, we see the Doom Patrol TV show, written by Paul Proch, featuring actors playing Robotman, Elasti-Girl, and Negative Man, fighting against "Morphex" (a copy of Animal-Vegetable-Mineral Man, however the producer at Thayer Studios, and the fact checker, Herman, aren't impressed and have different ideas. We find that as fact checker, Herman has spent a significant amount of time researching the Doom Patrol. He actually appears to be obsessed.

Retrieved from "https://heykidscomics.fandom.com/wiki/Doom_Patrol_Vol_3_20?oldid=1490992"
Community content is available under CC-BY-SA unless otherwise noted.