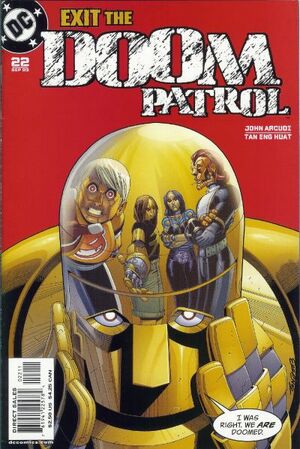 Do other super-teams lose members like the Doom Patrol? No. Of course not. If they did, nobody would get into the “hero” business.

Appearing in "A New End"Edit

Synopsis for "A New End"Edit

Doc Magnus saves Dr. Kolodenko by putting his brain into a robot body – just like Robotman. Of course Dr. Kolodenko immediately has many important messages for Cliff, such as “It is many women you are getting with the robot body, yes--?”

However, it doesn’t end there. Doc Magnus has transformed the entire * D.P., Fast Forward, Fever, Freak, & Kid Slick, into robots! This was all financed by Jost Enterprises and the beloved Jost, who is also – a robot.

Cliff, in shock that Doc Magnus would do such a thing, runs outside and discovers that the whole world has been – Captured! by Robots – or at least, everyone in the immediate area seems to have been changed into one. Cliff comes to his senses and realizes that he has gone insane. Cliff of course wakes up and finds that he’s in church. Sheesh! Robots don’t even need to sleep and even they fall asleep in church ;) Unfortunately, it’s the memorial for Dr. Kolodenko.

Filled with greif, Cliff goes off to visit a comatose Dorothy in the hospital. He is informed that Dorothy is brain-dead, and has to make a tough decision to let her go. Meanwhile, those D.P. kids get a visit from Jost, who tells them that they are evicted. With an agreement to receive a cut of the money from merchandising, plus a bonus ten-thousand dollars to get out now, the kids pack it up and call it a day.