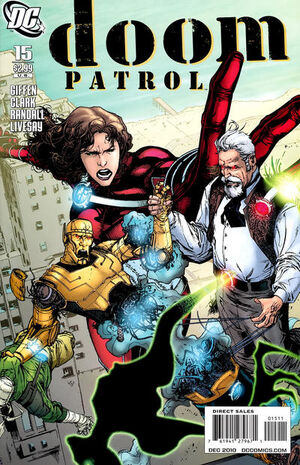 A world without weapons. How ever will it suvive?

Appearing in "A House Divided"Edit

Synopsis for "A House Divided"Edit

The Chief, recently imbued with Kryptonian powers, decides that he should dis-arm the world of all guns. On Oolong Island, President Veronica Cale nationalizes the Doom Patrol and tasks them with stopping the Chief and bringing him back, since he killed a Kryptonian on Oolong soil. The team sets out and finds the Chief. During the fight, The Chief talks about how the Doom Patrol was a family, how he saved and molded each member in his image. This doesn't sit to well with the team. Thanks to advice, and a few hypno-pulses, from Millicent, Caulder is incapacitated. He has once again lost the use of his legs and is contained in a chamber. In his personal journal, he writes "a parent should never outlive his children."

This issue contains a 5-page preview of Teen Titans Vol 3 88.

Retrieved from "https://heykidscomics.fandom.com/wiki/Doom_Patrol_Vol_5_15?oldid=1424374"
Community content is available under CC-BY-SA unless otherwise noted.