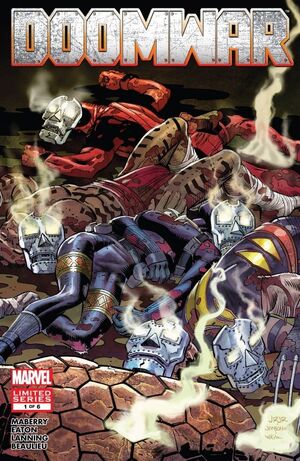 Wakanda has been conquered, its Vibranium reserves plundered. Storm faces execution in the next 48 hours. And Dr. Doom stands triumphant. It will take the combined forces of the X-Men, the Fantastic Four and the two Black Panthers to stand against him. A war has begun that will pit the world's most relentless super-villain against a collection of the world's most powerful super heroes -- one that will span the globe, offering twists and turns and surprise players (hello, Deadpool!) that neither side will see coming.

Retrieved from "https://heykidscomics.fandom.com/wiki/Doomwar_Vol_1_1?oldid=1651200"
Community content is available under CC-BY-SA unless otherwise noted.