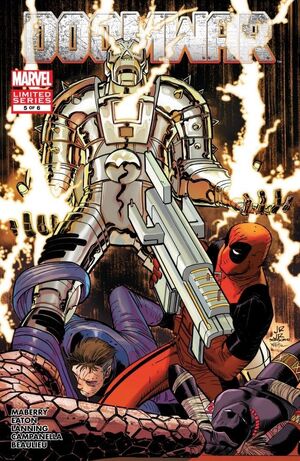 The Fantastic Four, Storm, Deadpool and the Panthers continue to hammer at Doctor Doom, attacking his worldwide network, destroying his factories, and trying to force him to face them on the field of battle. But you have to be careful what you wish for, because when Doom wages total war, he doesn’t leave any ammunition behind.

Retrieved from "https://heykidscomics.fandom.com/wiki/Doomwar_Vol_1_5?oldid=1655293"
Community content is available under CC-BY-SA unless otherwise noted.