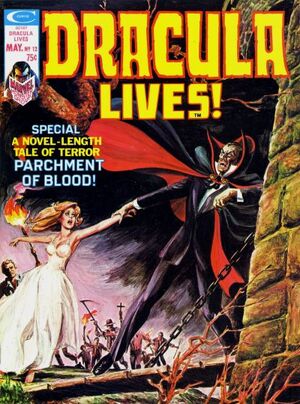 Appearing in "Parchments of the Damned Part 1"Edit

Synopsis for "Parchments of the Damned Part 1"Edit

1597: Dracula writes in his diary, and has come to the decision that he will no longer play the part of the warrior prince or the defender of the people of Transylvania, deciding to forever embrace his vampiric urges and become a terror of the night, acting alone and needing nobody. Finishing his entry, he flies off in bat form to find another fresh victim to feed upon. As Dracula stalks the streets that night, a group of men cower in a nearby tavern, wondering what they can do to stop Dracula. A man named Durenyi tells them that they must take a course of action, and find a way to destroy Dracula so that they no longer have to live in fear.

Getting the bar patrons' attention, they inquire what he means. Durenyi has theorized that Dracula must have some kind of weakness, and that perhaps the vampire lord has may have left these secrets written somewhere inside his castle. He tells all gathered that he is willing to break into Dracula's castle, and steal whatever he can find... for a price. They all agree and pay Durenyi his fee and he goes off to break into the castle.

After Dracula feeds, he returns to his home, where ironically, he continues his diary and notes down some of his weaknesses -- particularly his aversion to religious symbols and the sun. Finishing his entry for the night, Dracula is about to retire to his coffin before the sun comes up. Having spied on Dracula, Durenyi sneaks into Dracula's study through a window and steals his diary. However, before he can escape he accidentally knocks over a vase, alerting Dracula to his presence. Dracula tracks Durenyi down and attacks, slashing Durenyi's face. Durenyi flees.

When Dracula has Durenyi cornered in a dead end corridor, the thief pulls aside the blinds revealing the sun. To further compound the pain on Dracula, the cross shaped window frame causes Dracula additional agony. Having been tipped off to at least two of Dracula's weaknesses, Durenyi smashes the glass in the window and escapes into the daylight.

Furious, Dracula vows to get revenge against Durenyi. Continued in part 2....

Appearing in "Parchments of the Damned Part 2: The Stealer of Dracula's Soul"Edit

Synopsis for "Parchments of the Damned Part 2: The Stealer of Dracula's Soul"Edit

The following day, Durenyi tells the gathered townspeople that he has learned the way to destroy Dracula, and demands that he be paid the 1000 gold pieces. He informs them that he has the key to destroy Dracula. The townspeople, not wanted to be taken for fools, tell Durenyi that he will be paid only when his claims of their being free from Dracula's curse is proven the following night. Durenyi agrees to their terms and departs.

That night, Dracula awakens and goes out into town to feast upon a fresh victim. When he arrives in town, he finds that nobody is around. However, when he finds himself in a dead end while searching for a victim, he is surrounded by townspeople armed with crosses. Dracula is horrified to find that the entire town has learned one of his weaknesses. With no means of defending himself, Dracula transforms into mist and departs. With Dracula defeated, the people pay Durenyi the moeny he has asked for. Durenyi then goes back to the inn, to rest up before he travels to his native Snagov.

Dracula returns to his castle and realizes that the reason why the people knew of Dracula's weakness toward religious symbols is because his diary had been stolen. Dracula then realizes what Durenyi was doing in his home the night before. Furious, Dracula vows to kill Durenyi and reclaim his diary.

Traveling back into the town, he overhears two women talking about Durenyi's claims, which confirms his suspicions. Confronting the two women, Dracula hypnotizes them and orders them to do his bidding.

Appearing in "Parchments of the Damned Part 3: Paper Blood"Edit

Synopsis for "Parchments of the Damned Part 3: Paper Blood"Edit

Dracula seduces two women to learn that Durenyi was the man who stole his diaries, which were used to inform the people of Transylvania of his weaknesses. Learning that Durenyi is a native of Snagov, Dracula decides to go to that town to prepare a reception for the thief.

The next morning, Durenyi leaves his hotel, proud that he is 3,000 gold pieces richer and has another 1,000 pieces coming to him when he gets home. He decides to make one more transaction, and goes to a book store to try and sell Dracula's diary. The book owner is a man who is preparing to retire, and is selling all his books to an agency in London that is willing to buy his inventory by book instead of by unit. The old book shop owner is indeed interested in buying Dracula's novel, however he only agrees to purchase it for 40 gold pieces. He tells Dursenyi that the only people who would be willing to pay an exorbitant amount for the book, would be the same superstitious and frightened people who were willing to pay him 3,000 gold pieces for stealing the diary, and even if they could afford to, they would be too frightened to buy it. The book store owner assures Durenyi that he is not one of these people, and considers Dracula just another cut-throat in the land. With no other choice, Durenyi agrees to sell the book for 40 gold pieces. After Durenyi leaves, the shopkeeper indifferently adds Dracula's diary to the pile of books to be shipped to London.

Durenyi returns home to his native Snagov, where he is chased by townspeople who capture him and tie him up. They are angered because Durenyi's claims that he destroyed Dracula have appeared false. They tie him up until dark, and then throw him out into the streets to prove his claims. Armed with a crucifix, Durenyi fearfully walks the streets, however he is soon disarmed of his religious symbol by a rabid dog under Dracula's control. Just then, Durenyi is confronted by Dracula and an army of his vampires. Dracula demands that Durenyi hand of his diary, however, when Durenyi tells him it's been sold and shipped to London, Dracula angrily strikes him and leaves him for his vampire legions to feed upon.

Centuries later, in 1896, the novel is found in a second-hand book stall in Sheephead Row in London by Bram Stoker. Meeting with one of his colleagues, he tells him about the find. He tells his friend that he finds the diary of such a horrid man inspiring, and has decided to write a novel about it. His friend says that he looks forward to reading it.

Synopsis for "The Sins of the Fathers"Edit

1465: Dracula has a celebration put on for visiting dignitaries from other countries: Vargas of Spain, Von Roon of Prussia, and Benitio of Bologna. They have come to Transylvania to ask that Dracula stay out of their realms. Insulted by this, Dracula has them all killed by his legion of vampires and decides to go and feed on innocent people in each of these lands. Dracula would travel far and wide seeking out fresh victims in all these lands, however he would grow bored with the same dull routine and return to Transylvania to resume his rule of the country.

While in Prussia, a man named Hans is furious that nobody has risen a hand against Dracula, and vows to travel to Transylvania and slay him for murdering his sister who was one of Dracula's first victims in the country. Arming himself with special silver arrows he leaves to fulfill his quest. Along the way he is caught in a blizzard which kills his horse and he himself almost dies of frost bite. He is found by the young and beautiful Rachel van Helsing who takes him in and nurses him to health. During this period the two fall in love, and Rachel hopes that he will not continue on his mad quest. However, once he is fully healed, Hans would sneak out one night to complete his vengeance against Dracula. When Rachel awakens to find Hans missing she realizes that she is too late to stop him.

Rushing out of her house she joins her father to witness a horse carriage from Dracula's home ride by and toss Hans' lifeless body (arrow jutting from his chest) to the ground. With the man she loves now dead, Rachel van Helsing vows to destroy Dracula utterly, thus begins the long running animosity between the van Helsing clan and Dracula.

Retrieved from "https://heykidscomics.fandom.com/wiki/Dracula_Lives_Vol_1_12?oldid=1680742"
Community content is available under CC-BY-SA unless otherwise noted.